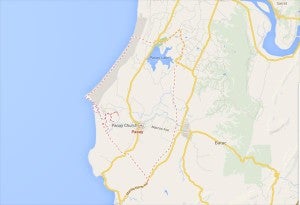 MANILA, Philippines—The Sandiganbayan has dismissed the claim of the family of the late President Ferdinand Marcos to a 57.68-hectare lakeside resort in Paoay, Ilocos Norte, because the area specified in an impugned contract was an actually an “inalienable public domain,” it being a national park.

In a 33-page decision by the anti-graft court’s First Division dated April 21, 2014, the court declared the 1978 lease agreement between Marcos and the defunct Philippine Tourism Authority null and void.

“The Paoay Lake and lands within one kilometer from its water line… was declared to be a national park and therefore considered public land. These were, therefore, outside the commerce of man,” the court said.

The verdict was penned by Justice Rafael Lagos, and was concurred in by Justices Rodolfo Ponferrada and Efren  de la Cruz, division chairman.

The court said the late dictator had no right to bind the property in any agreement or proprietary transaction as supposed owner because he did not own the property.

“Section 101 of the Public Land Act provides a remedy whereby lands of the public domain fraudulently awarded to the applicant may be recovered or reverted back to its original owner, the government,” the court ruling said.

“An action for reversion has to be instituted by the Solicitor General, in the name of the Republic of the Philippines,” it added.

This means all 154 lots covered by the lease agreement, structures found on them, and even those that are already covered by approved patents to the children and grandchildren of Marcos and any other third-party, were property of the Republic.

Aside from the lots, the court also placed under the control of the government, through Tourism Infrastructure and Enterprise Zone Authority (TIEZA), the Malacañang Ti Amianan (Malacañang of the North), Maharlika Hall building, Suba Sports Complex, the Old Motor Pool, swimming pools, tennis court and an 18-hole golf course.

Court records showed that no less than 79 lots in the questioned property are already under free patents or have pending free patent applications by Ilocos Norte Gov. Imee Marcos and her children.

More than half of the lots already have approved and/or pending patent applications by the Marcos heirs and other persons.

Senator Marcos had insisted to the court that the Paoay resort estate was not the subject of any forfeiture move by petitioner Presidential Commission on Good Government and therefore cannot be considered ill-gotten wealth.

He also questioned the jurisdiction of the Sandiganbayan over the case.

The court said state lawyers should now ask the Department of Environment and Natural Resources and the Land Management Bureau  to nullify adverse claims by other parties on parts of the questioned property.

The court said lawyers from the Office of the Solicitor General and the PCGG were able to establish that the property previously belonged to the government and was thus transferred to the Marcos family and their associates illegally.

But the court said the fact that the PCGG never sequestered the property was immaterial.

“What matters is that the petition alleges that the former president used all his powers and influence to appropriate to himself all the lots covered by the lease with scanty claims of ownership,” it said.

The court cited as proof of unlawful financial interests by the late president the “hundred of millions of pesos” development undertaken on the Paoay property with the use of taxpayers’ money shortly after the lease agreement was signed.

It likewise cited the patent applications made by the Marcos heirs over the developed lots covered by the lease.

“T)he Marcos heirs have concentrated their free patent applications on the lots where most of the improvements are situated. Just on this score, the lease contract should be declared void,” the ruling said.

The court took more than four years to resolve the case after it was filed by the PCGG on March 3, 2010.