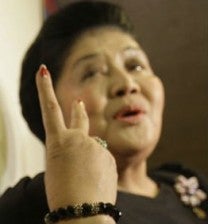 MANILA, Philippines—The Sandiganbayan First Division has ordered the forfeiture of one of the three jewelry collections of former first lady Imelda Marcos known as the Malacañang collection with a value of about $150,000 in 1986.

In an order signed by Sandiganbayan Associate Justice Efren De La Cruz which was made public Monday, it declared that the pieces of jewelry belongs to the government.

“…The pieces of jewelry known as the Malacañang collection [is] ill-gotten and are hereby forfeited in favor of petitioner Republic of the Philippines,” the anti-graft court said.

The anti-graft court in its ruling said the Marcoses failed to show proof that the jewels were lawfully acquired.

The Malacañang collection is the last of the three collections with pending case. It was left behind in 1986 by the Marcoses in haste at the height of People Power 1.

The other collections include the Roumeliotes Collection composed of 60 pieces of jewelry and is dubbed as the most expensive of the three collections, and the Hawaii collection which was confiscated by the authorities when they landed at the Honolulu Airport after they left the country in 1986.