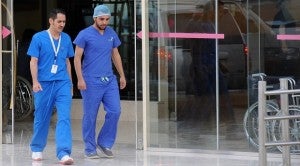 MANILA, Philippines—After nearly a week after an overseas Filipino worker landed at the Ninoy Aquino International Airport with the Middle East Respiratory Syndrome Corona Virus, the Department of Health has released the names of those passengers yet to be tested.

Through its Facebook account, DOH released the names of the 43 passengers of Etihad Airlines flight EY0424 that arrived in NAIA on April 15 from Abu Dhabi who are yet to subject themselves to a “nose-throat-swab.”

“Again we are appealing to the passengers to cooperate with the DOH to prevent the spread of MERS-Cov,” it said in its post.

According to DOH the following are still to be tested: