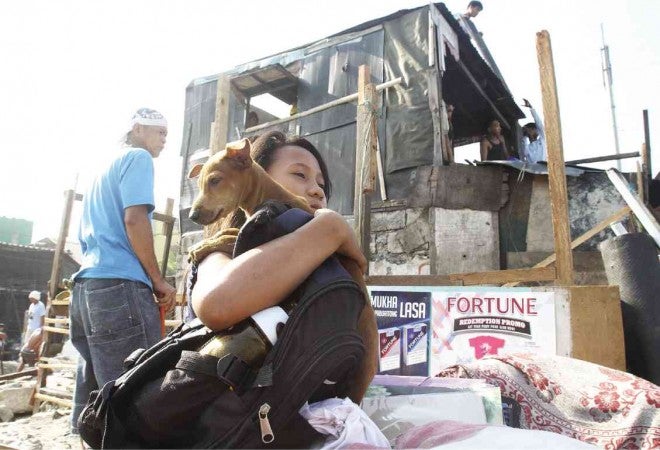 PORT OF NO RETURN. Jamaica Lanosa, 11, secures her family’s belongings and her pet Lindon as demolition crews descend on their neighborhood Tuesday to clear shanties and make room for a P14.5-billion port project in Tondo, Manila. JOAN BONDOC

Around 100 families were evicted from shanties in Tondo, Manila, on Tuesday, with 400 more to follow as the government began clearing the area to widen the road and make way for the construction of a modernized port.

Police said the demolition went without any violent incident on Road 10, from the corner of Zaragoza Street up to Lakandula Street, where a 300-strong crew tore down the structures on orders from the Department of Public Works and Highways (DPWH).

Around 100 policemen were deployed to deter any confrontation with the evicted residents.

The road works are part of the P14.5-billion modernization project of the Manila North Harbor Port Inc. The Philippine Ports Authority (PPA) said the project was part of the commitment of the Department of Transportation and Communications (DOTC) and the PPA to provide a world-class facility for shipping passengers.

In 2013, a new passenger terminal building with modern amenities was unveiled at North Harbor to accommodate larger vessels and an annual passenger volume of two to three million.

According to the Samahang Magkakapitbahay sa Road 10, an urban poor organization, Tuesday’s demolition left about 100 families homeless, with 400 more set for eviction in five barangays in Tondo.

The group’s vice president, Rocel Berdan, claimed that “what they are doing is illegal because they have not shown us any document ordering us to vacate our homes.”

But according to Rose Nartates, officer in charge of the National Housing Authority (NHA) in Tondo, the families were served a notice of demolition on April 14, giving them seven days to vacate their homes and transfer to the relocation site prepared by the NHA in Trece Martirez, Cavite province.

Nartates also recalled that the DPWH issued a notice of eviction as early as August last year.

But Berdan maintained that majority of the people eke out a living as vendors, drivers and porters at the port, and that they would make an appeal for City Hall to arrange an “in-city relocation” instead.