An antinarcotics agent was wounded when a coworker accidentally fired his service firearm inside the Philippine Drug Enforcement Agency (PDEA) headquarters in Barangay Pinyahan, Quezon City, on Monday night. PDEA agent Ryan Mabasa Pellovello, 25, was hit in the left arm after the gun being cleaned by fellow agent Julius For-og went off. He was taken to East Avenue Medical Center for treatment. Kamuning police station commander Supt. Limuel Obon said the accidental shooting happened around 8 p.m. on Monday. They learned about it from a PDEA security guard who called them up to report the incident. Julie M. Aurelio

A man was arrested on Tuesday morning after he exposed himself to a woman inside the library of the Quezon City Police District (QCPD) headquarters.  Esteve Mortega, 27, a resident of Barangay Botocan, was taken into custody after a staffer at Camp Karingal, Quezon City, complained that he showed his privates to her. Police investigators said they were filing an unjust vexation case against him although it would be up to the victim if she wanted to push through with the filing of the complaint. QCPD spokesperson Senior Insp. Maricar Taqueban said the man was able to enter the camp after he claimed he wanted to ask for help in burying his dead child. However, he failed to present a death certificate. Taqueban added that Mortega, allegedly a drug dependent, often went to the police headquarters to ask for money from a relative who was a QCPD policeman. Initial investigation showed that Mortega went to the QCPD library where the victim, a 40-year-old female staffer, was working and asked for permission to borrow a book. “He then called me to the shelves because he wanted to ask something so I walked toward him. He had a book in his hand and he dropped it on purpose,” the woman narrated. As she bent down to pick up the book, Mortega pulled his shorts down and exposed himself to her. The woman quickly ran out of the library and sought help from policemen nearby, leading to his arrest. Julie M. Aurelio 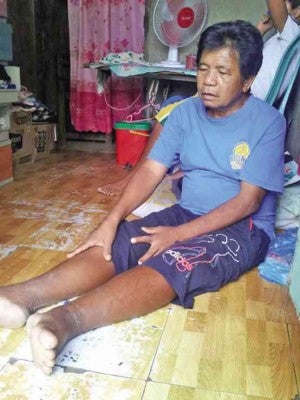 February 7 started out as an ordinary day for Mario Austria, 54, a snack vendor in Tarlac, Tarlac, until he lost his balance, stepped on a wet spot and fell, hurting his left leg. The first doctor they consulted told them that there was no fracture but when Mario found himself still unable to walk more than two months after his accident, they went to another doctor, his wife, Angelita, told the Inquirer. According to Dr. Dominic Santos of Ramos General Hospital, Mario’s leg was broken and he needed to be operated on so that a metal implant could be placed on his broken leg to allow it to heal. The surgery would cost them P150,000, a prohibitive cost since Mario has been unable to work due to his condition. Angelita, on other hand, is a house helper. They have two children, both still in the elementary grade. Those who want to help Mario can call Angelita at 0919-4372519. Donations for his surgery can be deposited in their friend Patricia S. Espinosa’s BDO account (3700194077).