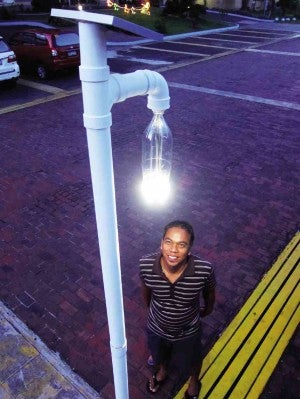 BOTTLED BRILLIANCE . A sample of the solar streetlamps developed by MyShelter Foundation, to be installed on select footbridges and streets in Metro Manila PHOTO COURTESY OF MYSHELTER FOUNDATION

Instead of complaining about the harsh summer sun, why not turn it into a dependable, steady and economical source of eco-friendly light?

With this in mind, the Technical Education and Skills Development Authority (Tesda) and Metropolitan Manila Development Authority (MMDA) marked Earth Day on Tuesday by signing a pact for the Light the City project in which they will install 34 solar-powered streetlights on footbridges and streets in selected areas in Metro Manila.

Tesda will fund the production costs and provide the training for assembling the lights while the MMDA will supply the manpower and identify the beneficiaries.

The first of the four-watt solar street lights were put together Tuesday at the Tesda Women’s Center in Taguig City and installed on a footbridge on Quezon Avenue in Quezon City.

The streetlights cost P2,500 each and utilize the “Liter of Light” technology patented by the MyShelter Foundation. They are built with low-cost materials, including handmade mini-solar panels, lithium batteries, circuit boards, PVC pipes and one-watt LED bulbs wired inside 1.5 liter soda bottles. The bottles contain a mixture of bleach and water for light refraction.

The streetlights can last up to 12 hours and take just three hours to charge, Villanueva said, noting that these were also easier to assemble and install compared to electrical lampposts.

MyShelter Foundation executive director and founder Illac Diaz said the solar streetlights were first set up in the Philippines in areas hit by Supertyphoon “Yolanda” last year. “What we’re doing here is for Filipinos with an P80 a day income who can’t afford solar lights. We’re making solar light affordable. It can be really cheap,” he added.

Diaz also noted that the streetlights may “lower carbon emissions caused by electrical usage.” It could also help ease security concerns caused by dimly-lit footbridges and paths, especially in the metropolis, he added.

“Innovation and green technology are important. We shouldn’t just buy it abroad and retail it. We should be able to harness the power of the sun and other green innovations. But if Filipinos are not involved in the creation of the product, it’s just a transferred economy,” he pointed out.

Diaz added: “This isn’t complicated. It doesn’t need a factory. We can do it Pinoy-style.”