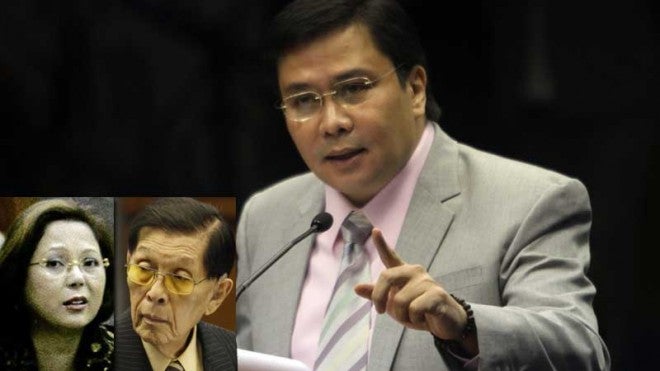 Take it from Sen. Jinggoy Estrada: Jessica Lucila “Gigi” Reyes isn’t out to save her own skin at the expense of her former boss, Sen. Juan Ponce Enrile. INQUIRER FILE PHOTOS

Take it from Sen. Jinggoy Estrada: Jessica Lucila “Gigi” Reyes isn’t out to save her own skin at the expense of her former boss, Sen. Juan Ponce Enrile.

Estrada said he believed Reyes came home “to face the charges against her,” but this did not mean she would testify against him or Enrile.

“I’ve known her for a long time. It’s not in her character to do that. She’s a very good person and an intelligent lawyer … unlike other whistle-blowers who were asked to come home to pin people down,” he said in a pretaped interview with radio dzBB.

Estrada, who is now in the United States, said he had no information that Reyes, Enrile’s former chief of staff, had been pressured to return to bolster the government’s plunder case arising from the alleged P10-billion pork barrel scam.

The Office of the Ombudsman has found sufficient evidence to warrant the filing of plunder charges in the Sandiganbayan against Estrada, Enrile, Sen. Ramon Revilla, Reyes, businesswoman Janet Lim-Napoles, her former aide Ruby Tuason and four others over the alleged diversion of lawmakers’ allocations from the Priority Development Assistance Fund (PDAF) to ghost projects and kickbacks.

Tuason, a former aide of Napoles who also fled to the United States last year, told the Senate blue ribbon committee on her return that she handed Reyes millions of pesos in PDAF kickbacks intended for Enrile. Reyes, along with the others accused, has denied wrongdoing.

Justice Secretary Leila de Lima said yesterday that Reyes remained among the principal accused. She said Reyes had not asked to become a state witness and that whether she could qualify as such was a “big question mark” for the Ombudsman to sort out.

The 51-year-old Reyes left the country last August, a month after the PDAF scandal hit the headlines and sparked nationwide indignation. She returned on Black Saturday on a flight from San Francisco.

“I’m ready to face the charges. I’ve always faced it,” Reyes told airport reporters on her arrival. Her brother, Patrick Gonzales, said Reyes was consulting her lawyers and would issue a statement shortly.

Levito Baligod, a private complainant and lawyer for most of the whistle-blowers in the PDAF case, told the Inquirer in a phone interview Sunday that Reyes was unlikely to turn state witness against Enrile.

He said that based on reports he had received, Reyes returned to attend to matters related to her plunder case that needed her personal appearance.

Baligod said the biggest question was whether Reyes would stay or leave again before the plunder case reaches the Sandiganbayan, expected middle of next month. Plunder is punishable by life imprisonment and is nonbailable.

On April 7, Reyes filed a motion for reconsideration of the Ombudsman’s finding. She denied allegations that she received kickbacks. Her lawyers are demanding due process be accorded her and have sought copies of the affidavits of the state witnesses.

In a text message to reporters, De Lima said she was not surprised Reyes had returned.

“I don’t think she could stay out of the Philippines indefinitely. It’s not easy for such personalities to be ‘on the run,’ so to speak, or live in obscurity,” she said.

“Maybe it’s out of necessity because she felt she had run out of options, or out of self-preservation,” De Lima said. “Let’s just wait and see.”

Reyes has not contacted the Department of Justice (DOJ) or the National Bureau of Investigation since she left the country, reportedly for Macau in August last year, the justice secretary said.

“As far as the NBI/DOJ is concerned, she remains one of the principal players/respondents in the PDAF cases who have been rightfully indicted for plunder and other graft [charges and] for her remarkable role vis–à–vis JPE’s PDAF,” she said.

De Lima said Reyes “must face the charges and be dealt with by our justice system.”

If she comes clean, this will bolster the government’s case, De Lima said. “But as to whether she would do it only as a state witness or, more pointedly, whether she can qualify at all as a state witness, is another matter. To me, it’s a big question mark. But then again, the decision lies with the Ombudsman,” she added.

Deputy Speaker and Isabela Rep. Giorgidi Aggabao said that while it was difficult to divine Reyes’ intentions, he doubted that she would turn against Enrile.

“I don’t think she would qualify as a state witness. If she plans to flee ahead of the warrant of arrest, she should not have come home altogether because the warrant will surely be issued. I think she plans to face the charges four-square,” he said.

Aggabao said Reyes’ return showed what she felt about her situation. “She is probably confident that given the evidence the government has disclosed so far, she stands a good chance of beating the raps,” he said.

Gonzales said his sister’s return had no blessing from Enrile. A month after she left the country, Reyes issued a statement via her Facebook account slamming Enrile’s camp for distancing itself from her role in the pork barrel scam.

She said that if these statements were sanctioned by her former boss, this was tantamount to a betrayal by him, whom, she noted, she had served for 25 years “with full dedication, honesty and loyalty.” Enrile has denied betraying her former aide.