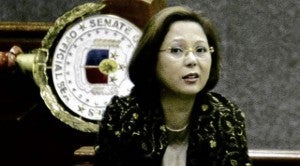 Lawyer Jessica Lucila “Gigi” Reyes, a former chief of staff of Sen. Juan Ponce Enrile, has been named by state witnesses as a recipient of kickbacks in the P10-billion pork barrel scam—a charge she has denied.

Reyes, along with another Enrile aide, Jose Antonio Evangelista, was one of the main contacts of Janet Lim-Napoles, the alleged brains behind the racket, in Enrile’s Senate office, according to whistle-blowers.

One government witness told the Senate blue ribbon committee that he and another employee had delivered millions of pesos in cash to her house at the swank La Vista subdivision in Quezon City.

Reyes left the country in August 2013—a month after the scandal broke out.

She was later charged with plunder in the Office of the Ombudsman, along with Napoles, Enrile and Senators Jinggoy Estrada and Ramon Revilla Jr. in connection with the alleged diversion of Priority Development Assistance Fund (PDAF) to ghost projects of nongovernment organizations (NGOs) controlled by Napoles.

In September, Enrile appeared to be distancing himself from the alleged illicit activities of his chief of staff, saying he did not sign any document endorsing any of the dubious agencies controlled by Napoles to carry out his PDAF projects.

Enrile’s lawyer Enrique de la Cruz said the senator did not give his blessings to what Reyes had done in the releases of his pork barrel funds.

Reyes insisted that her boss would normally designate her “or any of our deputy chiefs of staff” to sign endorsement documents on his behalf to the Department of Budget and Management (DBM).

Reyes at that time told the Inquirer that either she or Evangelista would sign documents required by the implementing agencies, “but only pursuant to the written authorization of the senator.”

In February 2014, Ruby Tuason, a former Napoles bagman who offered to serve as state witness in the case, said in her affidavit that she personally delivered to Reyes PDAF commissions for Enrile.

Reyes would pick up the money alone in a restaurant but that Enrile would sometimes join them, Tuason said.

“I remember occasions that Enrile would join us when we were almost done for a cup of coffee, and sometimes he would just come to pick up Gigi,” said Tuason, a former Malacañang social secretary who has offered to turn state witness.

In March 2014, Dennis Cunanan, who was the Technology Resource Center deputy director general when the questioned deals took place from 2007 to 2009, told the Senate committee that he often talked with Reyes regarding the implementation of Enrile’s PDAF projects. Cunanan, a respondent in the case, has likewise offered to become state witness.

When she was working with Enrile, the 51-year-old Reyes was dubbed the “24th senator” as she signed checks in the millions on behalf of the then Senate president. She resigned in December 2012, in the aftermath of the alleged selective distribution of Christmas bonuses.

Sen. Alan Peter Cayetano then said that Reyes had an unusual influence in the Senate.

“I leave my things to her and nothing will happen. I have poor (eye) sight because I am suffering from macular degeneration and because of the details that come into my office, she is the one doing this reading for me,” Enrile said.

“So, if they are implying that she is my girlfriend, well, I am too old for that. My God!” he said.

Enrile, who turned 90 last Valentine’s Day,  previously denied having an affair with Reyes. In 1998, rumors flew that Enrile was having a romantic relationship with Reyes, who is about 30 years his junior.

The two met shortly after Reyes graduated from the University of the Philippines College of Law in 1988 and joined the law firm of Pecabar (Ponce Enrile, Cayetano, Reyes and Manalastas).

Enrile’s wife Cristina had reportedly walked out on him and moved to the United States. A Chicago Tribune report in 1998 said she left Enrile following an adultery charge. Reyes was reported to be the “other woman.”

Last March 3, Enrile’s wife admitted in a TV interview on GMA News that the senator and his former chief of staff had an affair and that Reyes was the reason she wanted to leave Enrile.

Reacting to the statement of Enrile’s wife, Reyes said, “They are not all lies. But half-truths are half-lies as well.”

“Mrs. Enrile has her own reasons for muddling the facts, painting her own picture of her marriage and laying the blame on women, who, she said, were the ones who ‘offered themselves’ to her husband. Excuse me, I certainly did not offer myself to him,” Reyes said.