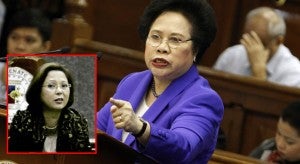 “For me the better option would be for her to turn state witness…Wala na syang ibang option (She has no other option),” Santiago said in a radio interview.

The senator said Reyes, who is being linked to the pork barrel scam, has only two options – to become state witness or to become a fugitive.

Santiago was positive that Reyes knows something about Enrile’s alleged misuse of the Priority Development Assistance Fund (PDAF) and it was the reason she left in the first place – so she would not be forced to testify against him.

(I will write a letter to the chair of our blue ribbon committee to summon Atty. Reyes to testify before the Senate.)

Pointing out that Enrile did not know of Reyes’ return, the Santiago said it was obvious that the two, who she accused of being lovers, had gone their separate ways.

Reyes, who served as Enrile’s chief-of-staff, was accused by whistleblowers to have received kickbacks from alleged pork barrel scam mastermind Janet Lim-Napoles.

(She should tell the truth about Enrile, her boss, that he received P500 million in kickbacks from Napoles and in exchange for that she will be let off the hook.)

So far, the testimony of whistleblowers has not been able to pin down Enrile as an actual recipient of commissions from Napoles. Ruby Tuason, who served as a middle man for Napoles and the senators, said she was only able to talk to Reyes who received the commission money in behalf of the senator. Enrile never talked to Tuason about the deals though he was seen fetching Reyes after their meetings.

Santiago said Reyes’ testimony is crucial because she will serve as the direct witness to Enrile’s involvement in the scam.

(I believe that Enrile is the mastermind. He was the one who encouraged Revilla and Estrada. I believe that he is the root of everything.)