‘No real progress in PH if dynasties not dismantled’ 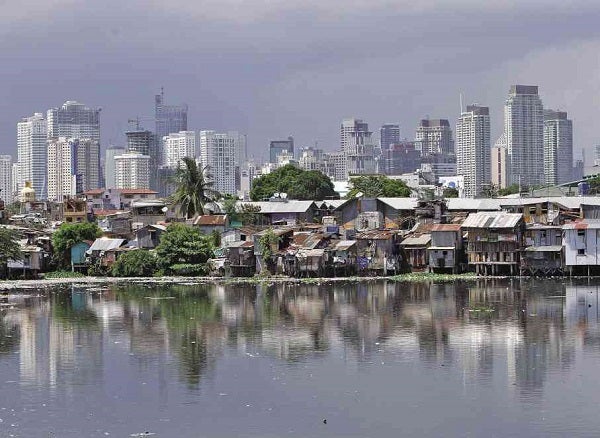 SKYLINE OVER POVERTY LINE The towering buildings are at the heart of Makati City, while the shanties are along an estero in Pasay City. INQUIRER FILE PHOTO

The Philippines remains a fragile democracy despite the Aquino administration’s gains that have not been enough to make up for “nearly a decade of regression” during the previous administration.

A new report by Bertelsmann Foundation, a German think tank, said true progress in the Philippines would be out of reach unless the improbable was achieved: Dismantling of oligarchies that control both politics and business.

“Since the election of Benigno Aquino III as president in May 2010, the overall development of democracy in the Philippines has regained momentum,” the group’s 2014 Bertelsmann Transformation Index (BTI) 2014 report read.

“However, the corruption and patronage under Gloria Macapagal-Arroyo’s administration left behind a difficult legacy for the current president,” it said.

Bertelsmann said the dominance of entrenched family clans in politics and the economy should be reduced in order to make politics and economics more transparent and competitive. The antidynasty law, which has been debated in Congress since 1987, must be passed, it said.

This, however, would be “highly unrealistic” since President Aquino himself and about 80 percent of lawmakers come from these dynasties.

The group’s BTI report, published every two years, analyzes and evaluates the quality of democracy, market economy and political management in 129 developing and transition countries. It measures successes and setbacks on the path toward democracy based on the rule of law and a socially responsible market economy.

The Philippines ranked 36th overall in the 2014 rankings, improving from 48th in 2012. In terms of political and economic transformation, the country ranked 40th and 44th, respectively.

Despite the progress made in the last four years, Philippine democracy, the report said, remained fragile.

“After nearly a decade of democratic regression under Macapagal-Arroyo, the current administration has so far shored up the country’s democratic institutions, but only to some extent,” the group said.

It noted that the former president presided more than 37 consecutive quarters of economic growth and “adeptly steered” the economy at the height of the 2008 global financial crisis. However, the majority of the population did not benefit from these gains, with just as many people in poverty at the end of her term as when it started.

The political gains that would have been associated with economic growth were also eroded by corruption scandals that rocked the previous administration. Government became more authoritarian during Macapagal-Arroyo’s term.

These came in the form of the prevalence of patronage for all government positions, a lack of transparency, a growing number of human rights violations against regime opponents and money politics to co-opt potential partners, the report said.

She also relied increasingly on the military to stay in power as mass demonstrations against her shook the country and many of the political and economic elites turned away from her.

Many of these elements have been removed from government. The BTI report said the Aquino administration’s success in impeaching former Supreme Court Chief Justice Renato Corona, a midnight appointee of the previous administration, punctuated these reforms.

“(But) Mr. Aquino still has a long way to go to consolidate democracy in the Philippines,” it added.

Bertelsmann noted that the recent abolition of the pork barrel system would have far-reaching effects in reducing corruption and the improvement of checks and balances between the executive and legislative branches of government.

Bertelsmann said the lawmakers’ pork barrels, officially known as the Priority Development Assistance Fund (PDAF), gave members of Congress unjustified discretion over public funds. It also made them dependent on Malacañang’s good will.

Another key reform under the current administration was the recent signing of a peace agreement with the Muslim separatists, a deal that promises to help usher in lasting stability in Mindanao.

The government’s success in pushing for the reproductive health law that intends to reduce the steadily growing overpopulation by providing sex education and facilitating the use of contraceptives was also cited as a major achievement.

Makati so rich it could fund another DOST, DOLE