Cardinal Tagle to faithful: Join politics to clean it 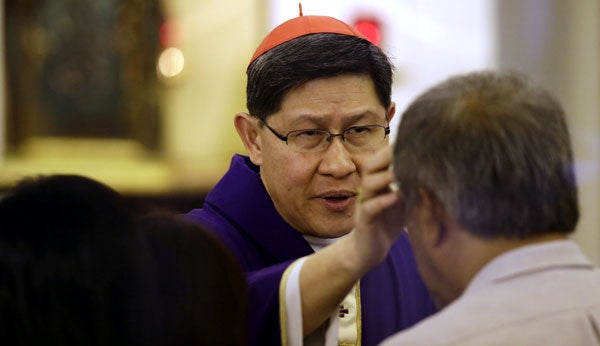 Luis Antonio Cardinal Tagle, the Archbishop of Manila, makes a sign of the cross on the foreheads of devotees during a mass in observance of Ash Wednesday. AP FILE PHOTO

Politics in this country too dirty for you? It is precisely the dirt in politics that should make you join it and clean it up.

Luis Antonio Cardinal Tagle, archbishop of Manila, urged the faithful during the Holy Week to enter the very institutions most prone to corruption, abuse, cheating, and to “align their affairs” with the “way of God.”

Among these are the worlds of finance, business, the arts, science and mass media. Weakness, malice, evil, faults and corruption stalk their halls and can be daunting to an upright lay person, but “with the values of Jesus,” one can overcome the “poverty” to be suffered in making the move, according to the cardinal.

Seek precisely to enter those “institutions and conditions of the world customarily an inducement to sin, to realign them with the kingdom of God,” he said, quoting the Second Vatican Council’s teachings.

“Huwag kang pahawa sa kanila. Hawakan mo ’yung corrupt nang mabawasan ang corrupt (Don’t be swayed or influenced by them. Hold on to them, so their numbers are reduced),” he challenged a packed recollection audience at St. James the Greater Parish in Ayala Alabang, Muntinlupa City, last Monday.

“Go be a contagious virus of holiness!” he thundered. A charming speaker prone to making light of heavy Church exhortations, the cardinal scratched his head and, quickly changing the somber mood at the venue, he waved to his audience. “Hi,” he said, smiling.

Cardinal Tagle then rued the hiring system in some government agencies: The well-connected but who know nothing get hired, not the competent. This is why some agencies and institutions continue to achieve nothing, he noted. Even in church, there are choir members who can’t sing but due to connections, become part of the group. Also there are “treasurers” who are not competent. “Treasurer pero ’di marunong mag-treasure (Treasurer, but does not know how to treasure things, people).”

In this the Year of the Laity, ahead of the 500th anniversary of Christianity’s coming to the Philippines, the focus is on lay folk who, as much as the ordained and the religious, are as much a part of the Church in bringing God to the materially, morally and spiritually destitute.

There are 85 million Catholics in this country but there are only 6,000 ordained priests, he noted. The predominant number of lay folk shows their key role in aligning the affairs of the world with the way of God.

Upright lay folk should not say, “Marumi ang pulitika. Ayoko diyan. Iwas tukso na lang (Politics is dirty. I’d rather avoid going there),” the cardinal said. “God should not be eliminated from the secular world. The lay person has the conviction in faith that can realign the faults with the values of Jesus. It won’t be easy but if we bear the Lamb of God in us, we can face the sins of the world.”

He is saddened by the bad name nongovernment agencies, for example, have acquired lately due to the pork barrel scam in the legislature. Interpreting the Second Vatican Council’s teachings, the cardinal said Filipinos should seek those institutions in society “customarily related to inducement to sin. Diyan kayo pumasok so transformation can be effected.”

Those entering such institutions should be prepared to suffer the “poverty” Jesus suffered, including the jealousy of others, betrayal of friends, empty promises, abandonment.

But because Jesus suffered all that “when he embraced the human condition,” Jesus “becomes their companion so they will never be alone,” the cardinal said.

He tells a story of why parents must embrace the “poverty of Jesus” in disciplining their children. They must deny themselves vices and addictions they forbid their own children to have. How can a father stop his teenage daughter from smoking if he himself chain-smokes? How can a mother insist that her daughter save money while she splurges on weekend shopping sprees?

“My father is a fake. My mother is a fake. You are a fake, all you adults are fake!” a teenage girl brought to the cardinal for counseling screamed at him.

“Gusto kong sakalin ang bata! Nakakainis talaga! (I wanted to strangle her! This was annoying!)” a peeved Cardinal Tagle said. “But I tried my best to sincerely listen to her. I asked myself: Is she an enemy with all her irreverence? I realized she was not an enemy, she was a friend. She was looking for someone she could trust, people with integrity, parents to lead her to her true humanity.” He said he told the father to give up his vice out of love for his daughter and asked the mother if she could try to be “poorer” by giving up her addiction to shopping.

The cardinal also rued the seeming misconception today of the grandeur of God. One forgets that God works simply, he said.

“You are a cardinal,” the man exclaimed. “You need an entourage befitting the dignity of a cardinal.”

Cardinal Tagle could not believe what he was hearing. “I was made to believe I was doing something wrong. Is having 20 alalay (aides) accepted as the norm?” he asked himself. He told the man that having an entourage would entail the added expense of having to feed them. “And I humored him, saying I was still relatively young and healthy, I could still push my own bags. He laughed.”

There were other occasions when the cardinal’s celebrity status perplexed him.

At a drugstore, the salesperson recognized him and brought out even the manager to have photos taken with him.

Security guards track his every move too, and sometimes, he had to brush them off, abruptly turning left or right while walking, without any signal.

“Bishop, marunong kayong tumakas (You know how to avoid them),” said one of his guards. “Aba, nakalimutan ninyo, galing ako sa Cavite.  Kababayan ko si Tiyagong Akyat (You must have forgotten, I’m from Cavite. Tiyagong Akyat, a local outlaw, is my province mate),” he recounted, and his audience laughed with him.

The point is, embrace the poverty of Jesus, he said. That in itself will enrich you.

‘Hardly a loving, respectful way to honor the Lord’