One killed, 17 others injured as Cotabato bus falls on its side | Inquirer News
Close
menu
search

One killed, 17 others injured as Cotabato bus falls on its side 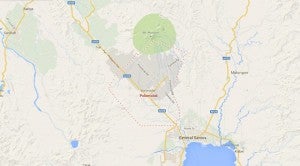 MANILA, Philippines – At least one was killed and 17 others injured after a passenger bus fell on its side along a road in South Cotabato on Friday, a radio report said.

The report said the YBL Bus was on its way to General Santos City when it tried to avoid a hole on the Glamang Polomolok road around 7:30 p.m. Friday.

The driver then swerved to his right before the bus fell on its side.

The report quoted a passenger as saying the bus was speeding even though it was raining.

The driver escaped, while the passengers were brought to the hospital.

The bus company said it would pay for the passengers’ hospital bills.

The Land Transportation Franchising and Regulatory Board said it would look into the bus company for possible sanctions.