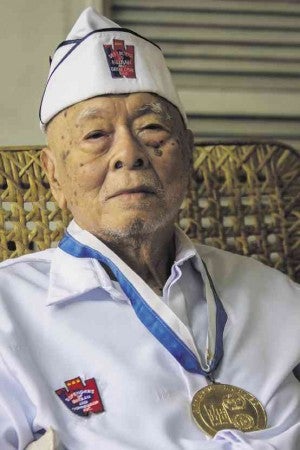 At times, he lies awake at night, haunted by an unforgiving recollection of comrades long dead, bombs exploding, guts spilling, limbs being torn off and tremors violently shaking the earth.

But his strongest memory of war is not so grim, Nolasco said in an interview on Tuesday, the eve of the anniversary of the Fall of Bataan on April 9, 1942, and a week shy of his 93rd birthday.

What he most vividly remembers, he said, is the kindness of Filipinos, “of people helping other people and trying to help others survive.”

He recalled meeting a stranger four days into the torturous 128-kilometer Death March, when thousands of Filipino and American prisoners of war were herded by the Japanese from Bataan to Capas town in Tarlac province.

He never learned the woman’s name, remembering only that “she was about 30 years old and was by herself, holding her baby.”

“I saw her, and I thought she could help me,” he recalled.

“She saw a desperate man and she probably thought, ‘This man is in need,’” Nolasco said.

There was no talking. He pretended to be the woman’s husband after hastily discarding his uniform and putting on pajamas and slippers thrown the marchers’ way by civilians.

Quietly and unobtrusively, the two left the line of marchers some distance before it reached Pilar town in Bataan, while the Japanese soldiers were busy trying to keep stragglers in check.

Much to his regret, he never got the chance to track his savior down, said Nolasco, who would later become a leading labor crusader and social justice activist.

In his home in Cainta town, Rizal, Nolasco appeared frail, with his hearing sometimes failing him. But his mind remained sharp as he shared recollections of the war.

The son of a doctor and a nurse who served in government hospitals, Nolasco was born in Dapitan City in Zamboanga del Norte province on April 15, 1921. He went to college at Ateneo de Manila University, but World War II interrupted his studies and he found himself a 20-year-old ROTC cadet volunteering to fight in the front lines.

Nolasco is the only surviving ROTC volunteer from his batch of 34. Ten died in the war, while the other survivors steadily dwindled over the years.

“I feel sad to be the only one left,” Nolasco said of the tight group of ROTC cadets, most of them from the Ateneo, Letran, the University of the Philippines and De La Salle University. Most of them were assigned to Company A of the Anti-Tank Battalion of the United States Armed Forces in the Far East (USAFFE).

On Dec. 26, 1941, when Gen. Douglas MacArthur declared Manila an open city, the ROTC was ordered to disband “for the simple reason that most of the ROTC units were unarmed,” Nolasco said.

“But we refused to disband and insisted on going to the front in spite of the fact that we didn’t have the arms to fight,” he added.

Brimming with patriotic fervor, the cadets tried to find ways to serve, until they heard that recruitment centers had been set up at University of Santo Tomas and Far Eastern University (FEU).

On Dec. 30, he recalled, “I was standing at the gate of FEU when our company commander, Capt. Eugenio Lara, saw me and said, ‘Don’t just stand there, get yourself a gun and join us at the front,’” Nolasco said.

As the volunteers had no supplies and equipment, they got themselves outfitted at the Quartermaster Depot at Port Area in Manila. “I had a gas mask and a Browning automatic rifle. Many of us had bandoliers. We looked so formidable … but actually the (arms) were useless because some of the guns misfired since they had not been tested,” Nolasco said.

“I didn’t know how to operate the rifle. It was all learning by doing,” he added.

In retrospect, Nolasco said the group was so unprepared. “When we first retreated into Bataan, that’s when we experienced bombing and first saw bloodshed. We almost vomited,” he said.

At night, he heard sobbing among the troops. “I didn’t cry. I don’t know why, but I never did,” he said.

Days before marching to battle, Nolasco visited his father on Tayuman Street in Manila’s Tondo district where the rest of the family lived. “Although he was proud of us, Papa told me, ‘Son, war is cruel,’” he recalled.

“I didn’t realize it was really that bad. It wasn’t like in the movies—shooting, medals, marches, parades and all that. It was hunger, disease, sacrifice, killing and all that. Then (Papa) gave me P15 to tide me over during the war.”

Nolasco’s group was assigned to defend the beach in Limay town in Bataan, fronting Manila Bay, according to an article written for the Inquirer by Aida Rivera Ford, sister of Estanislao Jaime Rivera, one of the heroic 34.

“There they stayed from Jan. 23 to April 8 without encountering any Japanese, but they helped repel four attempted landings on barges coming from across the bay,” Ford wrote.

“Blinded by bright searchlights, the Japanese were easy targets of the USAFFE artillery. Ed’s group, however, was caught [in the fire between friendly forces]. Behind them, on the slopes, was the USAFFE artillery group, and facing them were the big guns of Corregidor. Above them were enemy planes, [but] they had no antiaircraft guns,” Ford said.

At six o’clock in the evening, the group would pray the rosary, and others in the unit would join them, Nolasco said.

As fewer and fewer rations came, the group made meals of anything they could find, including monitor lizard meat, and rice gruel. “For sugar, we ate acacia pods, which made us dizzy,” Nolasco recalled.

There were divisions, too, within the group. “Some of those from the higher economic class spoke only in Spanish. My group mostly spoke in English, while the others were talking in Filipino,” he said.

On April 8, Nolasco’s group got its final order to break camp in Limay and to hold a defense line at Alangan river. This proved to be the last battle fought by the USAFFE troops.

“We could see the Japanese forces coming for us. It was around 4 in the afternoon. All of a sudden, there was firing all over the place… We were being hit with guns on Corregidor and hit by our own troops because they didn’t know where we were. We just kept firing [back],” he said.

The decision to kill, he said, “came by instinct.” He added: “It was instilled in us during our training: How sweet it is to die for your own country.”

“There was the first shock, which was strong. Then there were tremors, almost like the last gasps of a nation,” he said. “More or less we had a premonition that the Americans had given up Bataan.”

On April 9, the Filipino and American forces laid down their arms. Bataan had fallen.

“We received our orders to surrender. We said, no, we won’t surrender. Some of us were crying. But we had to follow orders,” he said.

After the war, Nolasco finished his undergraduate studies at the Ateneo and graduated valedictorian. He then enrolled in the university’s law school and later became a union organizer. He had eight children with his wife, Ella, including Inquirer managing editor Jose Ma. D. Nolasco.

In 2011, the Ateneo de Manila University Press published Nolasco’s “Unyonista: The Chronicles of a Social Justice Crusader,” a 256-page account of his life as a labor leader.

In 2013, Ateneo conferred on Nolasco one of its highest honors, the “Lux in Domino (Light in the Lord)” Award, for his extraordinary pursuits in the name of social justice.

Nolasco said the war had changed him and taught him to value others more than himself. “If I had not gone to war, I would not be the person I am now,” he said.