The Inquirer is running a series of articles on the country’s tourism crown jewels—somehow uncut but equally sparkling and surprising as the usual vacation haunts. The stories will appear three times a week during the summer months. Please send us your own hot go-to discoveries to summer by. Text 09178177586 for details.–Ed.

LUBANG Island, Occidental Mindoro—The mountain is only about five kilometers from the wharf here, but the deep forest marked by century-old trees proved lush enough to provide good cover for several Japanese soldiers who stayed on the island for 30 years, in the belief that World War II was far from over.

Lubang Island has since become a popular tourist destination for its Onoda Trail, a network of pathways that Japanese intelligence officer Lt. Hiroo Onoda and his group took to escape their enemies. The trail extends from Barangay (village) Vigo in Lubang town to the neighboring Looc town and would take three days to traverse. One loop of about 8 km could take tourists half a day to reach.

On the island are abundant fruits, wild animals and clear streams that had sustained the Japanese stragglers for years, with Onoda staying on the island even after his compatriots had left or were killed.

Century-old trees fenced in by new side growth and fruit-bearing trees and plants heavy with jackfruit, cashew, coconut, guava, banana and pineapple compete for the tourist’s attention. Wild boars, wild chickens, and small jungle animals may be a rare sight, but snakes would suddenly dart out from the undergrowth to cross one’s path.

Bird calls break the quiet as they flit above, foraging for food, building their nests and mating, sometimes inside nearby caves as in the case of fruit bats.

The trail may date back to the 1950s, but the signposts on it are definitely from more recent, eco-friendly times: “Beware of wildlife crossing the trail. This is their home,” says one. “The forest is a habitat for birds and other wildlife. Stay on the trail to minimize impact,” says another. Yet another cautions: “Avoid making unnecessary noise. We are visitors and the forest is home for many kinds of wildlife.” 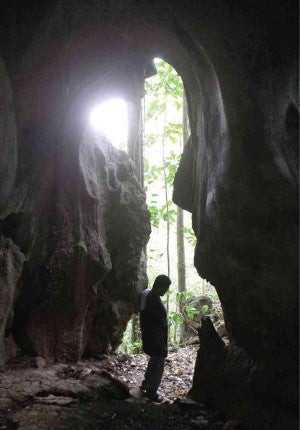 STRAGGLER’S CAVE One of several caves in the jungle of Lubang Island, where Japanese Lt. Hiroo Onoda hid for 30 years. LYN RILLON

Inside the forest are meandering streams that, according to then 22-year-old Onoda, he and the other stragglers used for bathing, drinking and washing their clothes. The group occupied the Lubang forest from 1945 to March 9, 1974, when Onoda, by then 52 and the only one left from the group, surrendered to a Philippine Army official.

“During the 30 years on Lubang, the only thing I always had plenty of, was water,” writes Onoda in his book “No Surrender,” which dramatically details how the stragglers survived the war in the jungle. “The streams on the island were … so clear you could see the bottom,” he writes in the book published in 1975.

Huge marble boulders and slabs greet visitors on the uphill trek of more than three kilometers from a junction that separates the Onoda Trail from the road leading to another village. After about 10 minutes’ trek is the first cave where the Japanese stragglers were said to have occasionally slept, cooked, and hid their arms and ammunition.

Further up is Cave 2 where swallows, locally called balinsasayaw, have built their nests and were now hatching their small ones. Several were flying outside the cave, dancing in the air like their name suggests.  The birds’ nests are highly valued and are used for making nido soup.

Downhill and then farther up are Caves 3 and 4, with Cave 4 considered the biggest among four caves, according to tour guide Rexon Tividad, 28.  Cave 4 is about 18 meters deep, he said, quoting an Australian spelunker he had guided recently. Cave 4 was closed recently, said Lubang tourism officer Gina Julaton, because of too many bats inside. Cave 5 is farther away and more difficult to reach, Tividad said.

The caves have been formed from marble described by tour guide Gerry Villaflores as black tiger because when wet, their blue and purple stripes resemble one. Several 30-centimeter-long stalactites stand at the mouth of Cave 1 and may be several thousands of years old, Villaflores said. Because of the marble boulders, the mountain has been called “Puting Bato.”

Strewn around the area are several marble slabs that Vigo village councilor Manuel Villaflores said had been cut years ago by miners and traders who brought them to Romblon. The local government stopped that trade when it took over control of the area, Villaflores said, adding that a Taiwanese trader had once asked for a permit to mine the area using destructive methods, but the council denied it.

Julaton said Lubang would like to develop the Onoda Trail and Caves for its distinctive historical and ecotourism character as part of its tourism master plan created in 2011. “We have developed the trail and put up handrails using tree branches, but without cutting trees,” she said.

An open hut has been built to serve as a rest area for trekkers going further up to the caves, with electricity provided up to this point.

Julaton noted the “great curiosity and enthusiasm among Filipinos, Japanese and other visitors to know more about the life story of Onoda.” She added: “The world deserves to know that this site has a historical significance during World War II on Lubang Island.”

The town has so far trained 16 tourist guides to educate tourists in the care of the forest. It plans to develop the trail as a hiking and camping site, and to use Onoda’s survival story as part of an adventure trek.

Lubang town in Occidental Mindoro is a fourth-class municipality located about 75 nautical miles southwest of Metro Manila. It is one of several towns that constitute the Lubang Group of Islands.

Best time to go: October to May

There are no banks nor ATMs on the islands.

How to get there

Take a bus or van from Taft Avenue in Manila to Calatagan (a ride of about 3 hours) or Nasugbu town (about 2 hours) in Batangas where ferry boats carry passengers to Barangay Tilik, Lubang, Mondays through Sundays.

From Tilik, tourists can hire tricycles, vans and boats. Call Norlie Tividad for van rentals (0907-9655831) or Nestor Masangkay for tricycle rentals (0910-4096228). No public vehicles ply Lubang’s roads. All vehicles are for hire per route or per day, but fare rates are regulated by the municipality.

Visitors should register with the Lubang Tourism Office at the municipal hall. User’s fee per site is P25.

Bring insect repellants and antiallergy medication for bites or allergies from trees or leaves.

A gem of ages: 7 island rock formations in Northern Samar