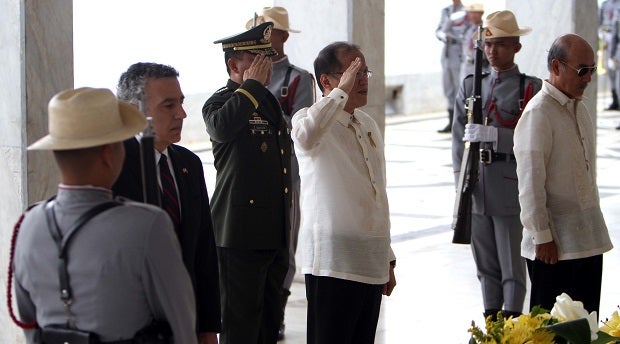 MT. SAMAT, Philippines — The government has stopped providing benefits to at least 22,534 supposed war veterans beginning this year as part of an ongoing effort to remove ineligible claimants in its list.

President Aquino said on Wednesday another 14,616 accounts had been suspended, allowing the government to recover a total of P396.61 million in pension remittances.

“The government now has the obligation to take care of our veterans. The only problem [is] many have joined the list, and have taken a share in the benefits, even if they are not true veterans,” he said in Filipino in a speech commemorating the Day of Valor (Araw ng Kagitingan) here.

“Now, we are making sure that every peso we give from our national coffers goes to the truly deserving.”

The President honored Filipino veterans who fought against the Japanese during World War II, saying “the State will continue to recognize your contributions.”

“Through the example you have set, the Filipino spirit remains alive today,” he said. “What we want [is] sufficient care for our veterans and their families, enough to match their devotion to our country.”

Aquino saluted veterans for their sacrifice, recalling that “you did not think twice about putting your lives on the line for the well-being of the majority.”

“Perhaps if one asks the current generation about the meaning of sacrifice, the most fitting answer would be your example,” he said.

“Was it not you, veterans, who, for the sake of our flag, charged with full resolve into danger and uncertainty? In the face of great challenge, you withstood hunger, thirst, and pain.”

As of last month, Aquino said the Philippine Veterans Affairs Office (PVAO) has been providing service to 133,784 veterans and their spouses.

The Veterans’ Memorial Medical Center (VMMC) now covers cataract operation, coronary angiogram and cardiac bypass procedure as “part of the list of services the government will pay for,” according to President Aquino.

“Just last year, the PVAO was able to provide for the schooling of 2,059 students. And when it comes to financial aid: we were able to give up to 36,000 a year for each qualified dependent of our veterans,” he said.

“The current generation of Filipinos is indeed fortunate: they need not look far to see and recognize true role models,” the President said.

“From names etched in stone, to heroes whose stories did not find their way to being inscribed in books, and even to each Filipino doing his part to bring about lasting change—every single great act makes up and strengthens the identity of the Filipino people: unwavering in principle, brave, and ready to confront any challenge.”