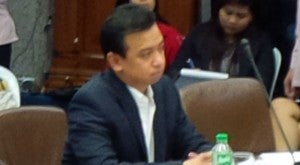 MANILA, Philippines–As the country observes the Day of Valor this Wednesday, Senator Antonio “Sonny” Trillanes IV called for the immediate passage of Senate Bill No. 166 or “An act providing for the payment of arrears in the veterans pensions and benefits.”

Trillanes, chairman of the Senate committee on national defense and security, said the passage of the bill would be in accordance to the government’s obligation and commitment to pay for the benefits of military veterans and their dependents under RA 7696.

During a hearing of the committee, the senator pointed out that RA 7696 was enacted “in recognition of the relevant role our war veterans and military retirees played in protecting the country.”

“However, a number of them have died without enjoying the benefits due to lack of government funding because it was not specified under the law,” he said.

The government, he said, appropriated an amount of P170 million in 2010, and P2.9 billion in 2013, for the payment of the Total Administrative Disability pension of World War II veterans who are aged 80 and above.

“However, the scope of the said appropriations was not able to cover all the veterans, and the amount was not enough to cover the total government obligation,” Trillanes said.

Under his proposed measure, the said arrears should be paid through the proceeds from the development, lease, or other use of government properties. Under this set-up, the national government will be able to accomplish its constitutional mandate of providing assistance to said beneficiaries without affecting the national budget.

“There are still many things that can be done to uplift the status of our veterans; majority of whom are now elderly, sick, underprivileged, disabled, and poor. They receive very small pensions, and little benefits and medical assistance. I believe they deserve to be respected and appreciated for what they have done in honor of our country,” said Trillanes.

“This recognition should be equated with a responsive and a continuing set of programs and projects for the care, benefits and welfare of our veterans,” he said.

The committee also tackled during the hearing other bills that seek additional benefits for veterans and military retirees.