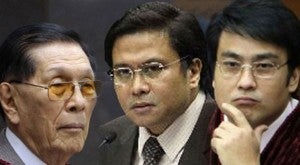 The Anti-Money Laundering Council (AMLC) has started moves to freeze the assets and bank accounts of the lawmakers implicated in the pork barrel scam and recommended for prosecution for plunder by the Ombudsman, Justice Secretary Leila de Lima said on Friday.

“I am not at liberty to be sharing the work of the AMLC, but suffice it to say that the AMLC has been working on this. It’s just that they started with those whose involvement was clear, based on the whistle-blowers’ affidavits,” she said.

De Lima was replying to reporters’ questions on whether the assets of the senators linked to the scam—Senators Juan Ponce Enrile, Jinggoy Estrada and Ramon Revilla Jr.—would also be frozen like those of alleged scam mastermind Janet Lim-Napoles.

Press reports on Friday said that a Manila court issued an asset preservation order on Thursday against the bank accounts, vehicles and real properties registered under the name of Napoles, her family and other people linked to the scam, including whistle-blower Benhur Luy.

The court was acting on a petition for civil forfeiture of assets filed in February by the AMLC against Napoles et al.

It was not clear why the lawmakers were not included in the petition for forfeiture that the AMLC filed.

“As to whether AMLC is also going to apply for the freezing of deposits of the other players, of the other personalities being implicated, it’s for AMLC really to do it,” De Lima said.

The justice secretary explained that asset recovery is “really a part of the integral process of exacting justice in anticorruption cases, particularly in plunder as it involves public funds.”

“In seeking justice there are five areas of coordination—fact-finding, preliminary investigation, prosecution, trial and recovery of assets,” she said.

In a plunder case like this, she said, the theory is the money belongs to the government coffers, “it should be recovered.”

Other solons in next batch

De Lima also said that “new names,” meaning lawmakers who have not been named before, are in the next batch of pork scam cases to be filed with the Office of the Ombudsman by the National Bureau of Investigation.

She did not give any names, nor did she give a time frame for when the new batch of cases will be filed.

But she confirmed that they still involved the bogus nongovernment organizations controlled by Napoles.

De Lima said that her department has conducted an inventory of complaints filed and is looking at two sets of cases, those involving the Napoles NGOs and the non-Napoles NGOs.

Intent but no action

The Cebu Coalition Against the Pork Barrel System has asked Enrile, Revilla and Estrada to resign from office after the Ombudsman found probable cause to charge them with plunder.

“All public officials being tried should resign from office, not necessarily as an admission of guilt but so that the truth be known without undue influence,” said a statement from the civil society group signed by its lead convenor, Msgr. Romualdo Kintanar.

“At no other time in Philippine history has the reputation of the Senate been as damaged as it is now. The legislative branch has been subject to so much distrust from the citizenry,” it said.

The coalition said it was time to make an example of the power of the law, and regain the respect the legislature once had.

However, the antipork coalition noted that no concrete action has been taken yet on the scam.

“The Ombudsman has released news that it intends to file plunder and malversation charges against some senators and other respondents, while the Senate blue ribbon committee has only released its draft report recommending the same,” it said.

“Intent simply precedes action. It is not yet action itself,” it added.

At the Senate, Sen. Aquilino Pimentel III said the chamber should convene the ethics committee so it could carry out its role of hearing complaints against senators, though not yet against those linked to the pork barrel scam.

Pimentel said it would be prudent for the ethics committee chair to await the ruling of the courts on the plunder and graft case against Enrile, Estrada and Revilla before hearing any complaints against them.

This would be akin to a criminal court awaiting the resolution of a civil case before trying the same case, said the senator, who is a lawyer.

But he reiterated that the ethics committee should be constituted now so it could do its work.

Sen. Teofisto Guingona III, chair of the blue ribbon committee that conducted an inquiry into the pork barrel scam, earlier proposed that the ethics committee be convened to investigate the three senators.

“To restore the integrity of the Senate and the trust and confidence of the public, an institutional purging is needed once and for all,” he said.

Almost a year after the 16th Congress opened, the Senate has yet to convene the ethics committee. So far, there have been no takers of the committee chairmanship, presumably because of the extreme sensitivity of its work.

The chair and members of the committee are elected on the floor, and the Senate won’t be resuming sessions until May 5. With reports from TJ A. Burgonio and Carmel Loise Matus, Inquirer Visayas

Revilla says he was joking; Lacson stands by his story