3 senators should be put in regular jails—Santiago | Inquirer News 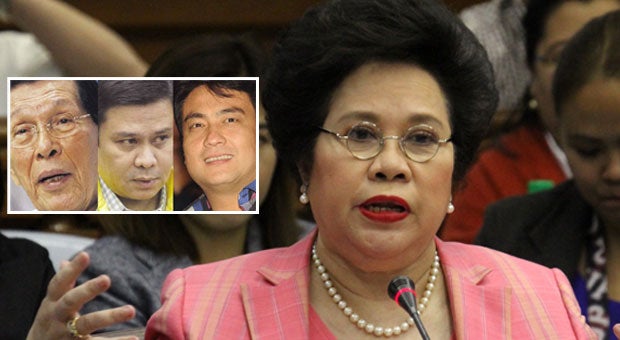 MANILA, Philippines—It is high time for Senators Juan Ponce Enrile, Jinggoy Estrada and Ramon Revilla Jr. to resign and authorities should put them in a regular jail instead of keeping them under house arrest or in air-conditioned palaces.

Sen. Miriam Defensor-Santiago and organizers of the Million People March on Thursday outlined moves that should be taken against the senators following Tuesday’s announcement by the Office of the Ombudsman that there was sufficient evidence to charge the three for plunder in connection with the P10-billion pork barrel racket.

Santiago said the three senators should be suspended and go straight to jail for the nonbailable crime of plunder.

“That’s automatic under the law. Once the Ombudsman files a case in court, which should be the Sandiganbayan in this case, automatically, instantaneously, the public official is suspended from public office,” Santiago said.

“In the face of overwhelming evidence, we are making an immediate call for the resignation of Senators Enrile, Estrada and Revilla. This, too, is overdue. In other countries a mere hint of wrongdoing is enough for public officials to resign their posts,” said the Scrap Pork Network, a group of netizens behind the massive protest at Rizal Park in August last year.

“The current administration’s daang matuwid philosophy continues to be ignored by corrupt officials who steal budgets for food security or who chip away at monies intended for public infrastructure, defense systems, healthcare, education and social services,” it said.

The kickbacks that Enrile, Estrada and Revilla allegedly received were “but the tip of the iceberg of fund scams,” the network said, adding it was looking forward to more indictments of lawmakers who allegedly diverted their Priority Development Assistance Fund (PDAF) to ghost projects and kickbacks.

“Seven months after our protest in Luneta, we believe that a full accounting by and prosecution of all involved are overdue,” it said.

Enrile, Estrada and Revilla have denied wrongdoing. Estrada said he would not preempt a suspension order by going on leave. “I didn’t commit anything wrong,” he said. Also charged with plunder were Janet Lim-Napoles, the detained businesswoman who allegedly engineered the scam, and six other individuals.

Santiago told reporters on Wednesday that the three senators should be treated according to law.

“Once the Ombudsman files the case in court, it should be automatic. The Sandiganbayan will now issue an order suspending these senators from office and they should be held in detention cells,” she said. “They should not be detained in air-conditioned palaces or be placed under house arrest because the people will see that there’s a difference in treatment when one is poor and when one is powerful.”

Putting the three senators including the 90-year-old former Senate President Enrile in a regular jail will prevent the perception that justice is “two-tiered” in this country, said Santiago.

Santiago expressed doubt that the three would be allowed to post bail by the Sandiganbayan once the charges against them reach the antigraft court.

“It’s like insulting the Ombudsman because the Ombudsman has already said that we are filing the case because we have found probable cause. We have evidence that is strong,” Santiago said. “Now, if the court allows them to post bail, it’s like saying that the evidence of the Ombudsman was weak. That will become a dilemma if the Sandiganbayan does that kind of thing.”

Santiago, who has a running feud with Enrile, said Tuesday was “a very happy day” after Sen. Teofisto Guingona III released the Senate blue ribbon committee draft report that found merit in the evidence against the three senators and after the Ombudsman found probable cause to charge her foe and his co-respondents.

“This is the very first time in our history that a Senate President has been indicted,” Santiago said, referring to Enrile, who presided over the impeachment trial of Chief Justice Renato Corona, who was convicted of dishonesty in his statement of assets, liabilities and net worth in May 2013.

“That is an indictment not only of the Senate President involved but also of the entire Senate. What kind of Senate will elect a Senate President a man who ultimately turns out to be one of the biggest thieves in the country,” she said.

Santiago said several other senators linked to the PDAF scam should also be investigated and prosecuted.

“Let’s look through the affidavits of the whistle-blowers and see who else were named there. They were named cursorily in the past media coverage,” she said.

“Now that we have in the process resolved the initial hurdles, we should go to the next ranking senators. So it’s possible that maybe the Senate may be diminished by maybe you know six, seven senators,” she said. She did not identify them.