Revilla says he was joking; Lacson stands by his story 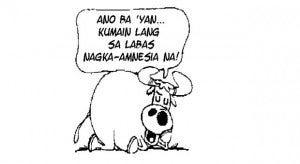 MANILA, Philippines—The banter seemed hilarious at that time, over a dinner of steak and scallops on a teppanyaki table at a Japanese restaurant in the swank Makati Shangri-La after the alleged P10-billion pork barrel scam broke into the nation’s consciousness in July last year and sparked widespread outrage.

Sen. Ramon “Bong” Revilla Jr., indicted on Tuesday for plunder in connection with the racket, characterized the remarks Sen. Panfilo “Ping” Lacson made then as “a joke.”

“Will you go into hiding?” asked Lacson, according to Revilla’s account of the meeting. “I will teach you. I’ve already done that,” Revilla quoted his former Senate colleague, calling him that “gentleman from Cavite,” like him.

“Again, we both laughed.”

In a text message, Lacson recalled that the discussions over dinner with Revilla happened after the scam broke out in a series of exclusive articles published in the Inquirer and covered a lot of ground, mainly politics under former President Gloria Macapagal-Arroyo.

“What I recall is that the topic on evading arrest started when he asked if I stayed in China the whole time and how I was while in hiding,” Lacson said.

“He sounded sorry and repentant, even saying he could have followed my lead in not accepting and using my pork barrel allocations, hence he wouldn’t have anything to worry about,” said Lacson who, along with former Sen. Joker Arroyo, never touched his PDAF allocations of P200 million annually.

“Then I joked that one of those who accommodated me had experience in countersurveillance techniques and that I could make a referral if he would need one,” he said. “The conversation shifted to other topics, GMA politics, etc., but reverted back to evading arrest when out of the blue, he asked about the person I mentioned to him. I just smiled.”

Revilla took a respite from a 10-day tour of the Holy Land to respond to an Inquirer article on Thursday quoting a source privy to the Japanese restaurant dinner suggesting that the actor-politician had asked Lacson for tips on going on the lam.

“We told stories as friends do and kidded each other but nothing of the sort as asserted by the article transpired,” Revilla said in a statement.

A former chief of the Philippine National Police, Lacson went to Hong Kong on Jan. 5, 2010, a month before a Regional Trial Court in Manila issued a warrant for his arrest for the murders of publicist Bubby Dacer and his driver a decade ago. He reappeared on March 26, 2011, after the Court of Appeals threw out the charges against him.

The Office of the Ombudsman on Tuesday announced that it had found probable cause to charge Revilla, Sen. Juan Ponce Enrile, Sen. Jinggoy Estrada and seven others with plunder in connection with the alleged diversion of their Priority Development Assistance Fund (PDAF) to ghost projects and kickbacks.

They all have denied wrongdoing.

“[Lacson] extended his sympathies to the persecution I was going through and said that he understands, since he was also persecuted in the past,” Revilla said. “He said he didn’t want to hide from the law when he did but he had to. We had a good meal together and the meeting ended quite well.”

Revilla said the meeting happened after the 2013 elections.

“If you can remember, our sons contested and vied for the vice gubernatorial post of our province. Our meeting was an act of magnanimity from both sides, as we wanted to ensure that our friendship was not affected,” he said.

“To impute any malice to that meeting is foul. I did not consult him on how he evaded the law, much more prod him to tell me. The vilification against me is already too much. Animals and barbarians are better off because they know when to stop. You don’t hit a man when he’s down,” Revilla said. “Yet they still continue to kick me even when I have fallen. Let God take care of them.”

Revilla confirms meeting with Lacson… but