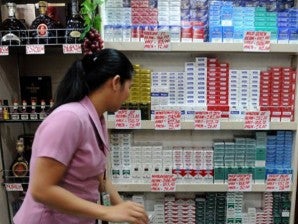 MANILA, Philippines – Moves to put graphic pictures on tobacco products gained ground in the House of Representatives, as another solon joined the anti-smoking campaign in the lower chamber.

The graphic pictures, which would show the ill effects of smoking, should comply with the guidelines to be issued by the Department of Health, the bill read.

For one, the warnings should occupy half of the display area in the front and back of the product, the bill said. The warning text should also be clear and readable.

The move was made as a sin tax law is in effect, which increased the excise tax on tobacco and alcohol products to jack up its price and dissuade consumers from vices.

The lawmaker said his bill is in accordance to the World Health Organization Framework Convention on Tobacco Control, of which the Philippines is a signatory.
Tobacco manufacturers and importers who violate the measure may be penalized with P1 million for the first offense, P5 million for the second offense, and P20 million for the third offense, during which the business permit and license may be revoked.

“We in the government must do our best to inform the public of the health hazards associated with tobacco products,” Treñas said in a statement on Friday.

At least 10 other similar bills have been pending before the House committee on health.

Sin tax law ups revenues but has not cut down smoking

Read Next
Fire hits Manila residential area
EDITORS' PICK
Do all the things you do, faster
Motorcycles, smartphones, and cash prizes up for grabs in TNT’s ‘Tuloy Ang Saya’ Raffle in Mindanao
House energy committee chair Arroyo bats for cheap electricity
NCR at increased COVID risk again
New PS-DBM director says DepEd laptop MOA ‘not legal’
House okays budget; ways to go in Senate
MOST READ
Robredo’s tarpaulin portrait at Palace just a ‘placeholder’
Shopee PH gets flak for getting Toni Gonzaga
Robredo supporter tackles elephant in room: No massive fraud in 2022 polls, surveys were just right
DepEd: We are in a crisis situation in education sector
Don't miss out on the latest news and information.