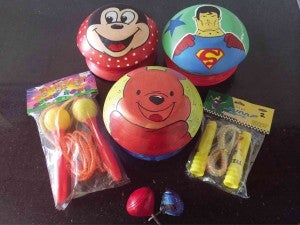 Not all toys are safe for children to play with, according to EcoWaste Coalition. Contributed photos

MANILA, Philippines—Playing traditional Filipino games may put your child at risk as some of the toys sold in Divisoria, Manila, have been found to contain high levels of harmful chemicals.

Environmental watch group EcoWaste Coalition issued this warning Sunday after a test it conducted on traditional toys bought from stores in the popular bargain shopping area showed above normal levels for lead as well as other dangerous ingredients.

“We want to inform the public of the potential chemical hazards in some popular summer games like sipa (a sport similar to sepak takraw), turumpo (top), holen (marbles) and luksong lubid (jump rope),” it said in a statement.

The group added that while it encourages kids to explore and enjoy traditional games, they and their parents should be on guard against playthings laden with toxic chemicals.

“These playthings which form part of our rich cultural heritage used to be plain and simple. But in this day and age, we find them in varying materials, colors and chemical makeups,” said EcoWaste Coalition Project Protect coordinator Thony Dizon.

The toxics watchdog analyzed 350 samples of sipa, turumpo, holen, lubid and palayok (clay pot) it bought from retail stores in Divisoria and screened these using an X-ray fluorescence instrument.

Results of the test found that all 40 samples of sipa contained 100,000 parts per million (ppm) of lead, exceeding the 90 ppm regulatory limit. The locally produced sipa is made of packaging straw cut into strips which are bunched together with lead flat washers used by carpenters to secure roof nails. Originally, sipa was made of rattan, a palm with big stems usually used in furniture-making. 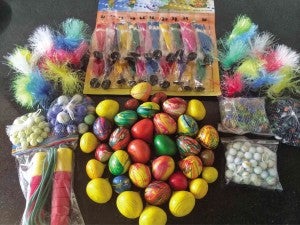 On the other hand, all 33 samples of the wooden turumpo, or spinning tops, which were painted different colors, also exceeded the 90 ppm threshold limit for lead set by the Department of Environment and Natural Resources.

Meanwhile, a skipping rope made of polyvinyl chloride plastic was found to contain 4,143 ppm of lead. The 271 holen or marbles tested negative for lead but they were found to contain arsenic and cadmium.

EcoWaste said the three samples of palayok, used for hit-the-pot games during fiestas, did not contain lead.

To avoid health-related problems caused by the harmful chemicals found in these traditional toys, the toxics watchdog advised children to play with toys made of indigenous materials like abaca rope for luksong lubid.

“Kids should pick playthings that are properly labeled, without lead components and not covered with lead paint,” it added as it advised kids to wash their hands thoroughly after playing and before eating.

In an advisory, the World Health Organization noted that lead exposure was estimated to account for 0.6 percent of the global burden of disease.

“Children are particularly vulnerable to the neurotoxic effects of lead and even relatively low levels of exposure can cause serious and, in some cases, irreversible neurological damage,” it noted.

With the serious danger posed by these chemical substances to health, EcoWaste appealed to toy makers to unilaterally switch to nontoxic alternatives and “embrace clean production for child-friendly toys.”

Read Next
Pasay undergoes makeover for World Economic Forum
EDITORS' PICK
Metro Manila mayors recommend extension of GCQ until yearend
Caroling, Christmas office parties not allowed in Metro Manila
Experience clearer calls nationwide with Smart VoLTE
Smart Prepaid encourages the youth to take their passions to the next level and ‘Live GIGA’
Arthaland’s property management arm utilizes Amazon Web Services to enhance delivery of service
Duterte: May Bonifacio inspire all Filipinos amid COVID-19 pandemic
MOST READ
‘What is mine is hers,’ says Matteo on sharing finances with his Popstar Royalty wife
‘Blind obedience’: Robredo twits Briones for pleasing only Duterte, not teachers, students
Lorenzana orders review of protocol in handling slain rebels’ remains
DOF to PITC: Return P1 billion in interest on ‘idle’ funds
Don't miss out on the latest news and information.