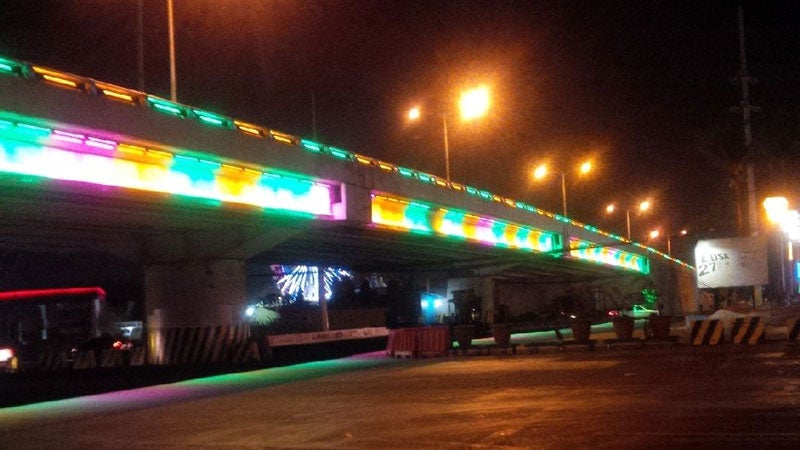 A flyover on Roxas Blvd. corner Gil Puyat Avenue in Pasay City is brightened up with multi-colored lights. PHOTO BY RICK ALBERTO

Pasay government officials have announced ongoing efforts for a makeover of the city as it prepares to host the 23rd World Economic Forum on East Asia in May.

Among those expected to attend are heads of state; CEOs; political, academic, business and other global leaders who shape global, regional and industry agenda and trends.

In a statement, Pasay Mayor Antonino Calixto said that aside from the beautification program, which would focus primarily on Roxas Boulevard and Gil Puyat Avenue, they would also deal with traffic management and other logistical concerns in coordination with the Philippine National Police, Metropolitan Manila Development Authority (MMDA) and other local government units like Makati, Manila and Parañaque.

“The Pasay City government will ensure clean, pedestrian-friendly streets and a safe, inviting and well-lit place during the World Economic Forum,” Calixto added.

“Improving the physical appearance of our city will make it more attractive to visitors and will show that Pasay is the best place to do business and to live,” he stressed.

Pasay Administrator Dennis Acorda said the city government has allotted half a million pesos for the beautification program particularly in areas near the PICC.

Pasay spokesman Jonathan Malaya, meanwhile, said that the city government, MMDA and the Department of Public Works and Highways would undertake improvement works in the airport area, which would include repainting of walls on the service road; installation of tarpaulin frames on selected lampposts; sprucing up of plants on the center island; replacement of busted lamppost lights; and sprucing up of plants in the Terminal 3 Rotonda.