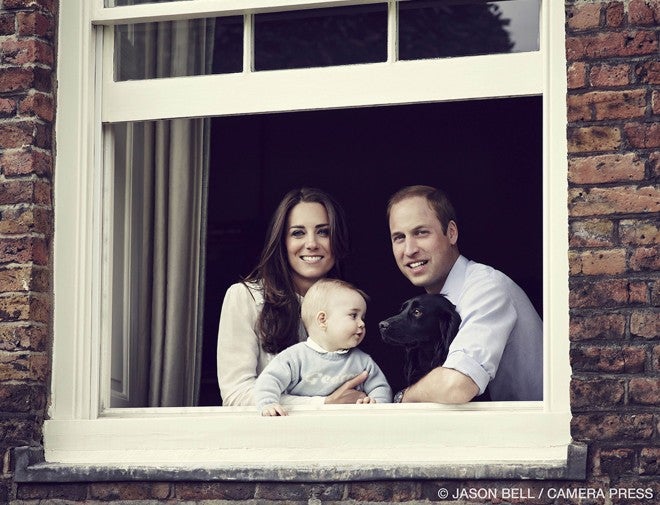 In a handout picture released by Kensington Palace and Camera Press on March 29, 2014 Britain’s Prince William, Duke of Cambridge (R) and Britain’s Catherine, Duchess of Cambridge (L) pose with their son Prince George of Cambridge (C) and pet dog Lupo at their residence in Kensington Palace in mid March 2014. Prince William and his wife Kate released a rare family photo on Saturday showing the couple with their eight-month-old son Prince George, ahead of their overseas tour to Australia and New Zealand. AFP / KENSINGTON PALACE / CAMERA PRESS / JASON BELL

LONDON – Prince William and his wife Kate released a rare family photo on Saturday showing the couple with their eight-month-old son Prince George, ahead of the little boy’s first overseas tour.

The Duke of Cambridge, the second in line to the throne, is pictured with his wife and son looking out of an open window of their apartment in Kensington Palace in London.

The smiling duchess, 32, is holding George on her knee as the little prince focuses his attention on the family pet Lupo, a black cocker spaniel pictured sitting on the duke’s lap.

Kate is wearing white, while William, 31, looks relaxed in a shirt with the sleeves rolled up. George sports a light blue jumper with his name written on it, over a white collar.

The baby boy, who is third in line to the throne, has only made two public outings since his birth – the first time as he left hospital, and then at his christening in October.

The photo, taken by celebrity portrait photographer Jason Bell a few weeks ago, was released ahead of the family’s tour to Australia and New Zealand starting on April 7.

George, who was born on July 22, 2013, will be a similar age to William when he made his first trip Down Under with his parents, Prince Charles and the late Diana, in 1983.

The royals will be accompanied on their 18-day trip next month by their new Spanish nanny, Maria Teresa Turrion Borrallo, who trained at the famous Norland College for childminders in Bath, western England.