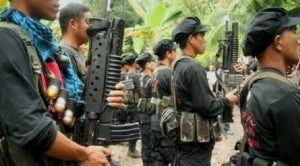 “The peace process is a way for us to solve the problem. (The CPP) should not use it as a propaganda tool to advance [its] armed revolution of overthrowing government,” AFP spokesperson Lieutenant Colonel Ramon Zagala said in a phone interview with INQUIRER.net on Saturday.

He was reacting to a CPP statement pictured the Philippine government as a “cunning enemy” of revolutionary forces.

The CPP said the government is faced with a short time to pass the Bangsamoro Basic law in Congress, where the CPP expects spoilers to raise constitutional issues before the Supreme Court.

Zagala said the CPP should not use in vain the peace agreement, seen as marking the end to Muslim secessionist movement and carving a new, autonomous Bangsamoro region in Mindanao.

“We should not use the peace process in vain… If the [CCP wishes] to find a real solution to the problem, they should join the peace talks,” Zagala said.

Negotiations for peace between government and the CPP’s political wing, the National Democratic Front, broke down in April 2013 due to a consensus that the talks were going nowhere.