Aquino: I will not let peace be snatched from my people again
By: Christian V. Esguerra, TJ Burgonio - @inquirerdotnet
Philippine Daily Inquirer / 02:22 AM March 28, 2014 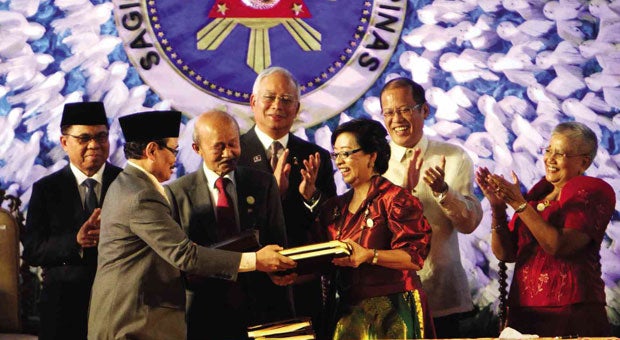 MANILA, Philippines—Where before his predecessor has failed, President Aquino on Thursday presided over the signing of a historic peace agreement with Moro Islamic Liberation Front rebels after 17 years of negotiations carving a new, autonomous Bangsamoro region in Mindanao.

Exuberant over the signing of the Comprehensive Agreement on the Bangsamoro in Malacañang, the President warned dissenters against “snatching peace away” from Filipinos, but at the same time, exhorted Filipinos to trade “bullets for a ripening fruit.”

“The Bangsamoro shall form a perimeter of vigilance against the spread of extremism; it shall act as a bridge of moderation among the great faiths of the various constituencies in Asean (Association of Southeast Asian Nations). From this shared security, we shall enhance the era of prosperity that is dawning upon our region, and harness its energies towards creating a regime of opportunity and inclusivity where no one is left behind. As the Bangsamoro matures, it shall serve as the gateway to trade, investment and cultural exchanges within the Brunei Darussalam-Indonesia-Malaysia-Philippines East Asean Growth Area and its environs—igniting a virtuous cycle of security, development and equitable progress for the peoples of the entire region,” the President said.

“Today, the Bangsamoro rises with Mindanao, the nation, the region and the world.”

Presidential Peace Adviser Teresita Deles could not have found better words to describe the significance of the moment.

But he made it clear that the peace deal was a “shared victory of the Bangsamoro and the Filipino people,” his group acting only as a “gatekeeper” during the transition toward the eventual establishment of the Bangsamoro.

Deles was just as optimistic, saying a “new dawn has come, the dawn for books, not bullets; for paintbrushes, not knives; for whole communities, not evacuation centers; and for rewarding toil, not endless strife.”

In her own speech, she recounted the story of child refugees (“bakwits”) who had to cross a raging river in North Cotabato while fleeing gunfire near their home six years ago.

They found themselves at the doorstep of one Ibrahim Rahman, a village leader, who gave them temporary shelter and later lent his 10-hectare property to the children’s families, the story went on.

Deles’ account drove many of the guests to tears, among them, a Muslim woman wearing a hijab.

“We stand here today to declare that, henceforth, no family shall be forced to drive their children away for fear of their being maimed and wounded by conflict; and that no child has to cross a raging river and knock on a stranger’s door to beg for protection,” the peace adviser said.

“The signal is so strong and unrelenting—no more war, no more children scampering for safety, no more evacuees, no more lost schooldays or school months, no more injustice, no more misgovernance, no more poverty, no more fear and no more want.

“Tama na (enough), we are all tired of it,” she added, her voice cracking.

“The comprehensive agreement is not only for the MILF—it is for the MNLF as well,” Murad said in a speech during the signing ceremonies, referring to the Moro National Liberation Front, a faction of which has rejected the peace accord.

Murad acknowledged the amount of work that still had to be done to realize the “intents and contents” of the agreement, which he described as “the most fitting solution to the undying aspiration of the Bangsamoro.”

“But we have not come this far only to be dampened by doubts and worries. In our midst is the confluence of favorable situations of abundant goodwill and tangible supports that put to rest all uncertainties, misgivings and even fears of what the future has in store for us.”

Behind them President Aquino, Najib, Murad and members of the two negotiation panels cheerfully applauded.

“If our goals as a nation are fulfilled, my brothers, Al Haj Murad, Mohagher Iqbal, and myself can all look forward to that one day in the not-so-distant future, when we will all sit back and enjoy a quiet sunset in Mindanao,” the President said, pausing to applause, then continued: “perhaps in the company of friends such as Prime Minister Najib Razak.”

“That day, we will look back to the 27th of March 2014, and allow ourselves a little pride. For now, more work needs to be done, and I look forward to building a peaceful, prosperous and inclusive Bangsamoro with all of you.”

Example to the world

“Together, we have set an example for the entire world,” Aquino said, referring to the Philippines and Malaysia.

“This agreement stands as a testament to how far trust and earnestness can move humanity forward. It shows how righteousness, reason and goodwill are the mightiest of instruments in ending conflict. It proves that the search for common ground is infinitely more productive than hegemonic ambition,” Aquino said.

As if to say that history was on the side of Filipinos for the realization of the hopes and dreams of the Bangsamoro, the President sent a terse message to the naysayers and cynics.

“Are you really that confident that we will have another singular opportunity like the one we have today? Do you really think that the confluence of factors such that exists today will happen again—when the Filipino people and their government are committed to redressing a historic injustice; where the international community has thrown its full support behind the achievement of peace; and when we have already fixed an electoral system that was designed to subvert the sovereign will of the people?” Aquino said.

The President warned dissenters against “snatching peace away” from Filipinos, but at the same time, exhorted Filipinos to trade “bullets for a ripening fruit.”

“Decades of fighting have robbed a generation of healthcare, of education, of income. With peace must come not just prosperity but opportunity. Only then will Bangsamoro’s future be assured,” he said.

Aquino reckoned that the signing of the peace deal could “lead to a permanent change in the status quo” in Muslim Mindanao, but its success hinged on “our continuous vigilance.”

Mincing no words, the President warned dissenters that they would be dealt with as the government had dealt with the followers of MNLF founding chair Nur Misuari that laid siege to seaside villages in Zamboanga City in September last year.

“May this also stand as a warning to those who wish to derail our path to a final, lasting peace—those who wish to sow divisiveness for self-interest, and those who continue to wield arms to pursue their own agendas: So many people have suffered for so long; so many of our stakeholders have worked so hard to arrive at this point. I will not let peace be snatched from my people again,” he said, drawing applause.

“Not now, when we have already undertaken the most difficult and most significant steps to achieve it. Those who want to test the resolve of the state will be met with a firm response based on righteousness and justice—as we demonstrated in Zamboanga City,” he added.

Aquino flew to Zamboanga City to oversee the military operations to flush out Misuari’s followers. The siege left nearly 200 people dead, and forced close to 120,000 people to flee their homes.

Even with the peace deal signed, the President said there were individuals who would champion the status quo to keep themselves in power and wealth.

“Maintaining fear and insecurity allows them to prey on the entrepreneur whose success is rewarded by kidnapping; the farmer who improved the rough land only to have it grabbed; the student whose very promising future is cut short by a bomb; the pensioner who, seeking security, falls prey to the unscrupulous pyramid scammer; or those mired in desperate times and desperate situations who fall victim to false prophets from either side,” he said.

With the signing over, the President said the Bangsamoro Transition Commission was now drafting a Bangsamoro basic law that “is equitable, practical and empowering” and served the country’s interest.

“It is a law that will have to pass muster as a President pledged to do justice to all, before it is submitted to Congress,” he said.

Read Next
In the Know: Peace deal with MILF
EDITORS' PICK
SANTIS Delicatessen: The road to survival is sweet and savory
Another Filipino falls victim to hate attack in California
Smart brings KCON:TACT especially 4U to subscribers from June 19 to 27
Smart celebrates all kinds of ‘#SimplyLove’ for Pride Month
Clippers rule out Kawhi Leonard for Game 6 with injured knee
Most anti-Asian attacks committed by whites – new study
MOST READ
Gordon eyes VP running mate for 2022 polls
PH temporarily suspends OFW deployment to Oman
Duterte not consulted on PH vote backing UN probe of Gaza violence
Roque: Duterte ‘shrugged off’ latest ICC step toward probe
Don't miss out on the latest news and information.