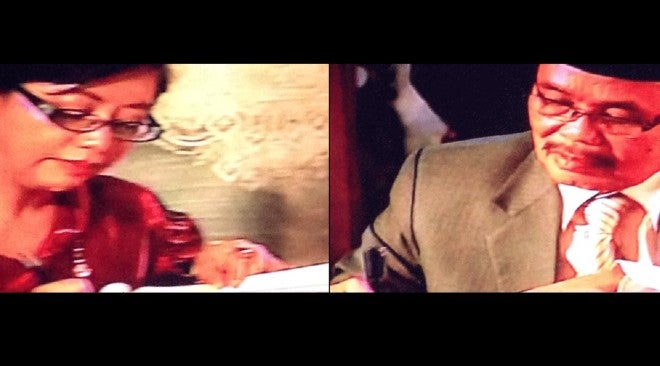 More than a thousand people filled the expansive tent set up on Malacañang grounds while hundreds of Muslim groups gathered in Quiapo in anticipation of the historic event.

The signing of the CAB marks the culmination of the 17 years of peace negotiations between the two parties and the supposed end to decades of armed conflict in Mindanao. It will pave the way for a new Bangsamoro autonomous political entity that will replace the Autonomous Region in Muslim Mindanao and will address various issues in the area such as poverty.

Earlier in the ceremony, Secretary Teresita Quintos Deles, presidential adviser on the peace process, declared that there would be “no more war” with the signing of the deal.

“No more war, no more children scampering for safety, no more evacuees…no more poverty, no more fear…Tama na (Enough), we are all tired of them,” she said during her speech at the Malacañang grounds.

Deles said the “new dawn” after the signing of the historic agreement would ensure that “no family will be forced to drive their children away for fear of being maimed or wounded by conflict.”

During the event, attended by foreign dignitaries, the Secretary thanked all those who made the signing possible, especially President Benigno Aquino III.

“Our common intentions will drive us forward,” she told the audience that included almost 500 members of the Moro Islamic Liberation Front.

The agreement will create an autonomous Muslim region in a large part of the southern Mindanao region.

The signing is a major political victory for Aquino midway into his six-year term, but much work remains to ensure the accord’s full implementation.

Mindanao is home to other insurgent groups, at least one of which has vowed to keep fighting. – With a report from Associated Press