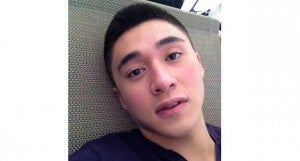 TV actor Aaron Villaflor in one of his Twitter photos

MANILA, Philippines—Alleged carjack gang leader Mark Lester “Mac” Reyes and his cousin, Joemel Salvatierra, have been tagged in the taking of a van belonging to a TV actor early this month in Quezon City.

The two men were implicated by the driver of TV actor Aaron Villaflor, 23, as the one who seized the actor’s Toyota Super Grandia at gunpoint along Quezon Avenue last March 8.

“Both were identified by Villaflor’s driver as the armed men who commandeered the van at gunpoint and even brought along the driver to the NLEX,” the official said.

Salvatierra was arrested last March 17 in Caloocan City on the strength of a court arrest warrant for an illegal possession of firearms case in Bulacan, while Reyes has not yet been arrested.

Joffri Valdez, a driver of Villaflor, claimed that the car thieves seized the white Super Grandia from him at around 4:30 p.m. March 8 at the National Bookstore building at the corner of Quezon Avenue and Scout Borromeo Street.

The suspects dropped Valdez at the NLEX’s Mindanao Avenue exit at around 5:43 p.m. that same day.

However, the driver was able to tag the cousins in the police rogues gallery. He also recalled one of the men mention the name “Niknok,” Salvatierra’s nickname, in a phone conversation during the carjacking.

“Footage from a surveillance camera at the Mindanao Avenue exit also showed the men’s faces, which turned out to be Reyes and Salvatierra,” said Senior Insp. Maricar Taqueban, the QCPD spokesperson.

Taqueban said a car theft case was being readied against the two suspects for their latest caper.

The carjacking happened a month after Reyes’ wife, Jasmine and son Mark Joseph, were ambushed while riding a taxi after a court hearing in Quezon City on February 18.

Police described Reyes’ operations as a “family business” with the involvement of his son. The older Reyes was never arrested although his son has been nabbed at least twice by the QCPD.

The Reyeses were previously tagged in a string of cases, including the seizure of the Toyota Fortuner of then Social Security System vice president Alfredo Villasanta in August 2011.

The vehicles stolen by Reyes end up with Salvatierra, his cousin, who allegedly dismantled the vehicles for “surplus” spare parts for sale in hideouts in Bulacan and Pampanga.

Prior to his arrest early this month, Salvatierra was arrested with four others at a safehouse in Baliuag, Bulacan, where they were suspected to be dismantling stolen car parts.

Salvatierra was also apprehended by QCPD operatives who served an arrest warrant from a Valenzuela City court after he attended a court hearing in Malolos, Bulacan in June 2013.

Salvatierra has been tagged in the January 2012 carjacking of ex-senator Aquilino Pimentel Jr.’s Toyota Super Grandia, and the taking of a Hyundai Tucson in Quezon City a month later.