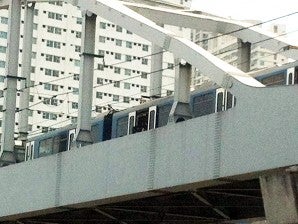 MANILA, Philippines—The management of the Metro Rail Transit Line 3 (MRT-3), which runs along EDSA in Metro Manila, has blamed the driver of a train involved in a “sudden braking” accident near Guadalupe station, injuring eight commuters onboard, and insisted that the MRT line remains a safe mode of transportation for millions of commuters in Metro Manila.

The injured passengers have since been brought to Makati Medical Center and so far three of them have been released, the statement showed.

The operator of the 17-kilometer elevated train line, which is used by over half a million people daily, said the driver “failed to observe the red light status at Guadalupe station” and accelerated the train without getting clearance from the control center at around 10:50 a.m. Wednesday.

The MRT-3 is equipped with an automatic train protection system, which kicked in and locked the brakes of the train. That action caused the injuries sustained by passengers onboard, which MRT-3 described as minor.

“This was clearly a lapse on the part of the train driver, who was only six months in service,” MRT-3 said in its statement.

MRT-3 meanwhile resumed normal operations despite the accident. It added that MRT-3 has been taking measures to prevent similar accidents although it did not elaborate.

“As it is, MRT-3 remains a safe mode of transport in Metro Manila,” the statement showed.

MRT-3 is one of the elevated railways serving Metro Manila. But in recent months, it has drawn sharp criticism from riders for its more than hour-long queues at its stations during rush hour.

The accident follows an unrelated issue on recent computer glitches that paralyzed a significant portion of MRT-3 on Saturday and Monday.

“What we fear though is that these unresolved MRT problems are being allowed to happen and deteriorate by the DOTC so that they can later justify increasing the current fare,” Bayan Muna Rep. Carlos Zarate said in a statement on Wednesday.

The Department of Transportation and Communications is mulling a P5-increase for an “average trip” under its “11+1” formula, which means a

boarding charge of P11 plus P1 for every kilometer traveled.

A train ride at the MRT-3, which his heavily subsidized by the government, is one of the cheapest means of public transportation in Metro Manila, with a maximum fare set at P14 from end to end. This compares with taking the bus, with rates for a similar route pegged at around P40 per trip.