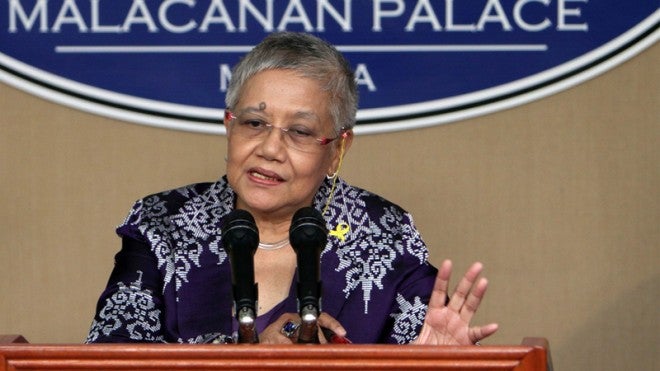 “As far as what is possible without making false promises, this is it, and we continue to hope that the entire Bangsamoro will see it that way as well,” Teresita Quintos-Deles, the presidential adviser on the peace process, said on the eve of the signing of a peace agreement with the bigger Muslim insurgent movements in Mindanao.

“I think we have a good enough platform to be able to say that, that this is giving it as far as it can go,” she told a Palace press briefing.

Malaysian Prime Minister Najib Razak, whose country served as a third-party facilitator, has also been invited to witness the event.

Deles said the signing is being held in the national capital, not in the MILF’s Camp Darapanan in Sultan Kudarat or elsewhere, to avoid “a logistic problem.”

“It’s easier for people to travel to Manila if you want people to come from all over,” she said. “Having it in Manila also makes it possible for other celebrations [elsewhere] to be held because when we beam it from Manila, then it reaches the entire country.”

Chief government negotiator Miriam Coronel-Ferrer described the peace accord as the Philippines’ “global contribution to the pursuit of peace in our immediate neighborhood, the Southeast Asian region, and the rest of the world.”

It comes nine years after “the last momentous agreement of this kind,” the one signed between the Indonesian government and the Free Aceh Movement, she noted.

“Many other countries [that] face similar troubles are looking up to us to show the way or possible modalities by which they can also address their own domestic conflicts,” Ferrer said.

“Our experience, our mechanisms, our approaches have become a rich source of inspiration to these countries that remain challenged by different sources of domestic hostility,” she said.

Ferrer also said the CAB would be “the first such agreement to be signed by a woman,” referring to herself. Two other women from the government panel, Yasmin Busran-Lao and Zenonida Brosas, will also be signing the document.

“Happy Women’s Month to everyone!” she said.

“The point, however, is not simply that you have women in Track 1, but that this agreement is a partnership in many ways: A partnership between the Bangsamoro and the Philippine government, between and among peoples of different faiths and ethnicity, and between men and women. And together, we can make it all happen. Together, we can make peace, not war,” she said.

Ferrer said the signing is “but a short station stop in this difficult but rewarding journey to build peace, development and meaningful autonomy for the Bangsamoro and the other people in the parts of Mindanao that will fall under the autonomous government.”

“We cannot rest. We shall be moving on full-speed ahead towards full implementation,” she said.

The basic law will be submitted to Congress for approval and “upheld in a plebiscite in the proposed core territory” to “formalize the entrenchment of the Bangsamoro political entity that will enjoy an enhanced political and fiscal autonomy,” according to a statement from Deles’ office.

“The signing of a peace agreement and the settlement of armed conflict with any other group that is in the same countries, certainly, exert certain pressures on any of the armed movement that is not yet moving along those lines,” she said.

Deles said part of the pressure would come from the public that would ask: “If this can be done here, in what has certainly been a very difficult peace process, why can’t it happen with you as well?”

But she said there should be “some inkling that [the NDFP] will reach a final settlement.”

“Under this government, those who are left out are those who want to be left out. So the door remains open to all fronts that [for] one to work together with government, it is still a call to partnership,” she said.

She said the parallel peace track with the NDF had been difficult.

All set for peace deal signing