All set for peace deal signing 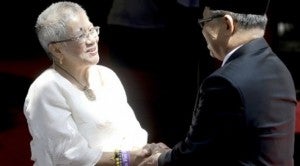 More than 1,000 guests, including Malaysian Prime Minister Najib Razak, have been invited by Malacañang for the signing ceremonies next Thursday of the comprehensive peace agreement with Muslim rebels.

The Moro National Liberation Front (MNLF) has also been invited. The MNLF, the main Muslim insurgency until it signed a peace agreement with the Ramos government in 1996, has felt left out of the negotiations for the new agreement.

“We are expecting more than a thousand guests to witness the signing of the comprehensive agreement on the Bangsamoro,” presidential spokesperson Edwin Lacierda said in a briefing for Palace reporters.

But the government is still waiting for confirmation from Najib, he said.

“We’re also inviting congressional leaders and the House of Representatives and the Senate to also witness the historic signing,” he said.

Congressional leaders have predicted that the basic law for the Bangsamoro autonomous region to be created for the rebels will be enacted by the end of the year, to be followed by ratification in a plebiscite.

The annex, which entails the gradual disarmament of the rebel group and the decommissioning of its 11,000-member army, and three other previously signed annexes comprise the comprehensive agreement.

Come to the party

She said the leaders of the major factions of the MNLF, as well as some “independents,” were on the guest list. She did not say if Nur Misuari, the MNLF founding leader, was among the invitees.

Misuari’s followers besieged several seaside villages in Zamboanga City in September last year, leaving more than 100 dead, and forcing close to 120,000 people to flee their homes. President Benigno Aquino III flew to the war zone to oversee the military offensive against the rebels, who were eventually flushed out.

Lawyer Jose Luis Martin Gascon of the Office of the Presidential Adviser on the Peace Process (Opapp) said the document would likely be completed on Saturday and initialed by the two parties before Thursday.

Steven Rood, country representative of The Asia Foundation, said one of the challenges in any peace deal is “how to convert the armed struggle to civilian leadership.”

Rood noted that one of the reasons the Autonomous Region in Muslim Mindanao (ARMM) failed was that the MNLF was thrust into a leadership that was still controlled by Manila-based politics.

“One of the many failures in the ARMM came from the fact that the politics was dominated from Manila and that  Muslim Mindanao was very useful for Metro Manila, that’s why it was interlocking autonomy,” he told a conference on Friday on electoral systems in the Bangsamoro that was organized by The Asia Foundation and the British Embassy.

The new Muslim-controlled region is expected to hold elections for its ministerial form of government in 2016, synchronized with the presidential election for the rest of the country.

Hundreds invited to signing of Bangsamoro accord