AFP to NPA on its 45th year: We have your supremo | Inquirer News
Close
menu
search

AFP to NPA on its 45th year: We have your supremo 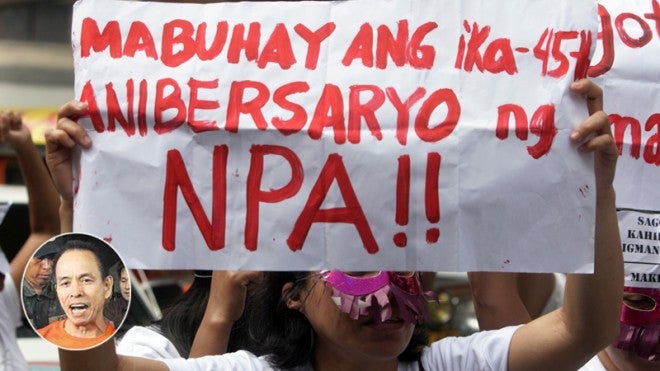 The military has a message to communist guerrillas, who are celebrating the 45th year of the New’s People Army (NPA) this week: Happy anniversary. We have your supremo. INQUIRER PHOTOS

MANILA, Philippines—The military has a message to communist guerrillas, who are celebrating the 45th year of the New People’s Army (NPA) this week: Happy anniversary. We have your supremo.

The military and police on Tuesday twitted the lawyers of Benito Tiamzon and his wife, Wilma, urging them to spare the couple’s feline and canine pets in discrediting the arrest of the two most senior cadres of the Communist Party of the Philippines (CPP).

The military said the Tiamzons were the “power couple” of the CPP, the organization behind the decades-old Maoist rebellion in the country that had claimed the lives of over 30,000 people.

Lt. Col. Ramon Zagala, Armed Forces public affairs office chief, maintained that government agents, who arrested the Tiamzon couple and five others in Cebu province on Saturday, had complied with the rules and procedures in arresting individuals.

As if taunting the NPA, the CPP’s armed wing that will be marking its 45th anniversary on March 29, Zagala said: “Happy anniversary. We have arrested your No. 1 and No. 2.”

He urged Rachelle Pastores and Edre Olalia, lawyers of the Tiamzons, to refrain from engaging in propaganda after they accused the police of “planting” the firearms and explosives recovered from the couple.

“There’s no truth to that,” Zagala told reporters when asked to comment on the lawyers’ claims that the Tiamzons were merely carrying three cats and four puppies—not guns and grenades—at the time of the arrest.

“Instead of presenting their case in the media, they should just present their evidence to the court, which has jurisdiction over the case against their clients,” he said.

Zagala said the arresting officers even took videos and photographs of the operation to prove that the arrest was valid and that the authorities respected the Tiamzons’ human rights.

Speaking for the Philippine National Police, Chief Supt. Reuben Theodore Sindac said the agents of the PNP Criminal Investigation and Detection Group (CIDG) had carried out the operation “with presumption of regularity.”

“There’s no such thing as planting of evidence,” Sindac said at a news briefing in Camp Crame, the national police headquarters in Quezon City.

“The policemen did their job in accordance with the laws. We have maintained regularity in the performance of our duties,” he added.

Pastores and Olalia assailed the CIDG’s filing of illegal possession of firearms and explosives against the Tiamzons and their five companions on Monday, arguing that the criminal charge was just an “afterthought.”

The lawyers also questioned the jurisdiction of the Department of Justice (DOJ) prosecutors who presided over the inquest proceeding at the multipurpose building of Camp Crame.

Pastores said the inquest should have been done right after the Tiamzons were arrested in Aloguinsan town, Cebu, and that the DOJ had no authority to transfer the venue of the inquest without a written court order.

The lawyers walked out of the proceedings in protest, saying the process “was highly irregular.”

“We will not participate in a questionable process. We will not recognize this process,” Pastores said.

Zagala expressed confidence that the arrest of Tiamzon, said to be the chair of the CPP and the head of the NPA, would lead to the resumption of peace negotiations between the communists and the government.

He said the 63-year-old rebel leader and his wife were the brains of the CPP’s political and military strategies, including the use of land mines, ambuscades and intensified tactical offensives against government targets.

Zagala surmised that some members of the CPP’s central committee may have been considering other means to pursue their clamor for social change, but were overpowered by a faction led by Tiamzon.

“The very leaders, who were espousing and encouraging the armed struggle and the use of violence against the government, are now behind bars,” he said.

“There’s now an opportunity for the remaining leadership of the CPP to look at other possibilities present in resolving the root causes of rebellion,” he said.

He said it was time to return to the negotiations table. “Let’s talk peace. We should not kill each other because we are all Filipinos.”

Zagala said the Armed Forces of the Philippines would continue its “focused military operations” while engaging communities in the government’s “peace-building efforts.”

He said the military’s new anti-insurgency blueprint, IPSP (Integrated Peace and Security Plan) Bayanihan, “is really the primacy of the peace negotiations.”

“We encourage them to abandon the armed struggle. There are other ways to resolve the root causes of insurgency through peaceful means. The military knows that the way to solve our problems is through negotiations, through the peace process.”

Zagala said the military and the police were processing the reward for the informer who tipped off the authorities about the location and identities of the two CPP leaders.

The government had offered a P5.6-million reward for the arrest of each of the Tiamzon couple.

“The inform[er] is the key to the arrest of the Tiamzons. We could not have done this without our partnership,” he said.

In the House of Representatives, Bayan Muna lawmakers initiated a move to investigate the alleged illegal arrest and detention of the Tiamzons and their five companions.

In a resolution asking the human rights committee to conduct the probe, Bayan Muna Representatives Neri Colmenares and Carlos Isagani Zarate accused President Aquino of acting in bad faith by giving the green light for the arrest of the Tiamzons even as he claimed that he still wanted to pursue peace.

Sen. Grace Poe said the arrests should prod the National Democratic Front of the Philippines, the political arm of the CPP, to go back to the negotiating table.

“If they have a sincere intention to be able to work out something for the good of the people, it’s always good to be at the negotiating table as opposed to having violent conflict,” Poe said in an interview.—With reports from Leila B. Salaverria and TJ Burgonio