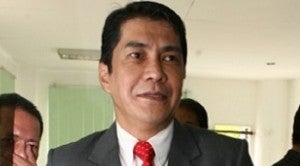 MANILA, Philippines—Broadcaster Erwin Tulfo, who found himself ensnared in the pork barrel scam, said he didn’t know he was dealing with pork barrel funds when he struck an advertisement deal with the Department of Agriculture (DA) through the state-owned National Agribusiness Corp (Nabcor).

Had he known, he would have turned down the deal for three-minute advertisement spots he called “premiums” during his program in 2009, Tulfo said in an interview over Radyo INQUIRER 990AM on Tuesday.

Tulfo is one of three broadcast journalists alleged to have received “payoffs” recorded as “advertising expenses” from Nabcor, one of the state-owned corporations that supposedly funnelled discretionary funds to the bogus organizations of Janet Lim-Napoles.

Tulfo noted he was not aware Nabcor paid for the DA’s advertisement spots amounting to P245,535.

“I didn’t know then that Nabcor was involved in anomalies. Had I known they were involved in Priority Development Assistance Funds (PDAF) anomalies, I would not have accepted the commercial,” Tulfo said in Filipino.

He also said that in 2009, he wasn’t aware that Nabcor was involved in PDAF anomalies.

“How would I know … that Nabcor and its officials would be allegedly involved in the (anomaly)?” Tulfo said in Filipino.

Tulfo filed a libel case against the Philippine Daily INQUIRER for its report on media payoffs, saying the report implied that his transaction with DA was illegal. He also said that for the alleged damage to his reputation and emotional distress caused by the article, he was entitled to P12-million compensation.

The report was based on documents provided by former Nabcor officials Rhodora Mendoza and Vicente Cacal to the Office of the Ombudsman claiming that 83 lawmakers instructed Nabcor, an agency attached to the DA, to release P1.7 billion from the PDAF to questionable NGOs, including those controlled by Napoles.

The Philippine Daily INQUIRER said it would stand by its story.

PDI on Tulfo libel suit: We stand by our story