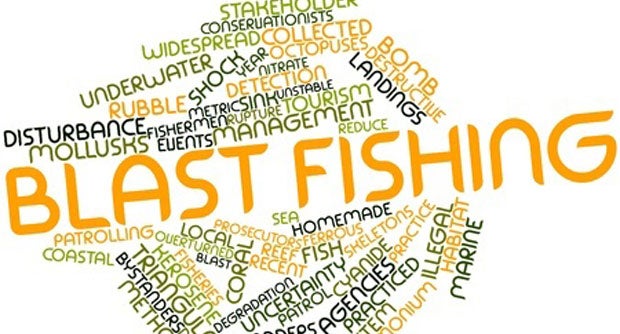 SURIGAO CITY, Philippines — Illegal fishing methods in the island of Siargao continue to take a toll not only on corals but also on ocean wildlife, with the killing of at least 22 dwarf sperm whales over the weekend.

On Friday, a beach resort in Dapa town, the island’s trade center, became a refuge for wounded dwarf sperm whales— apparently a mother and its baby— hours after what resident described as a series of dynamite blasts in the morning of that day.

“The whales, apparently 22 of them, were killed by dynamite fishing,” said Gianni Boy Grifoni, a Swiss-Italian marine biologist who is currently staying in General Luna town, the island’s surfing and resort haven that has become popular with tourists.

Grifoni, along with assistant Stephanie Chua, tried to save the wounded mother and baby sperm whales that got stranded off a resort in Kamaligan, Barangay (village) 12, in Dapa around 11 a.m. on Friday.

Both were badly injured, said Grifoni.

“I helped to check the status of the dwarf sperm whales. We arrived to save two at the beginning, one mother with the baby. The baby died on Saturday morning after suffering bad injures,” he said, adding there was slim chance the mother would be saved, too. On Sunday, the mother sperm whale died.

Donna Tiu, a Dapa resident who saw the two dwarf sperm whales when they arrived at the beach, said both looked severely distressed, their stab wounds visible.

“They looked as if they were pleading for help,” Tiu said.

Locals said it has become a common practice for dynamite fishermen to stun large ocean species like dolphins and dwarf sperm whales with a blast, and finish them off using bolos.

The meat is sold in wet markets but most are set aside for family consumption— a welcome treat for the fisherfolk that make up the majority of the island’s 150,000 population, scattered in nine impoverished municipalities.

Law enforcement has also been a persistent problem, with the police and some local officials being known to get whoever is caught using dynamite off the hook for reasons of compassion.

“They (the police and local authorities) merely confiscate the illegal fishing paraphernalia and then free the offenders,” said a local resident who did not want his name mentioned for fear of reprisal. “So the problem persists because no one gets punished.”

The sight of amputees is not uncommon throughout the island, in a stark reminder of how widespread the use of illegal fishing methods is.

In fact, dynamite fishing is all too common it has been blamed for the widespread destruction of corals around the island.

Jake Miranda, a businessman who is known for his marine conservation campaigns, earlier sounded the alarm over dynamite fishing’s impact on Siargao’s marine environment.

“Because one doesn’t see the obvious destruction caused by dynamite fishing. There are hundreds if not thousands of the same damage in other parts of Siargao. Coral never grows back easily. It takes a lifetime to bring back the fish,” Miranda said in a recent Facebook post.

“Today, dynamite fishing in Siargao Island continues unabated. It is time to stop it not for our sake but for our children and their children who are yet to enjoy the beauty and diversity of Siargao,” Miranda said, adding the nearby island province of Dinagat also suffers the same fate.