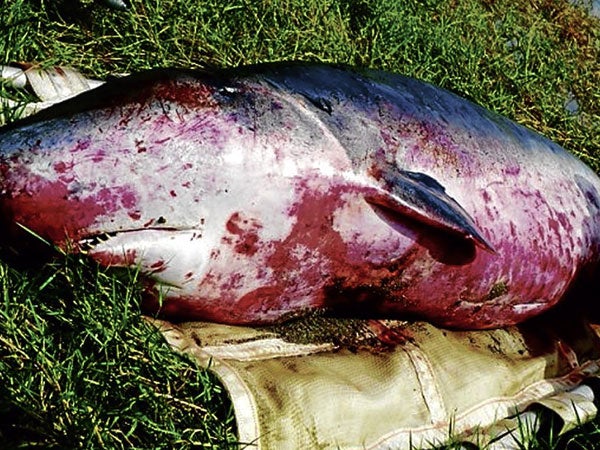 A PYGMY sperm whale that beached in San Narciso, Zambales, on Sunday died on Monday. PHOTO COURTESY OF OCEAN ADVENTURE

SUBIC BAY FREEPORT—Two pygmy sperm whales (Kogia breviceps) that were stranded on the beaches of Zambales and La Union died on Monday and Tuesday despite efforts by fishery officials and volunteers to save them.

Timothy Desmond, president of the marine park Ocean Adventure here, said, although saving the 3-meter-long whale found on Sunday in San Narciso, Zambales, was a “long shot” due to its condition, park personnel and volunteers tried their best to keep it alive.

Dr. Lemnuel Aragones, of the Philippine Marine Mammal Stranding Network, said the whale, which weighed over 700 kilograms, was found along the shore of Barangay Beddeng in San Narciso.

Aragones said the whale had scratches. “The animal was weak and had superficial injuries around the body,” said Dr. Mariel Flores, resident veterinarian of Ocean Adventure.

In La Union, another pygmy sperm whale that beached in Barangay Dalumpinas in San Fernando City on Monday died on Tuesday.

The 2.74-meter whale was given first aid and antibiotics by personnel of the Bureau of Fisheries and Aquatic Resources (BFAR) in Ilocos, but it was too weak when residents found it, said Nestor Domenden, BFAR regional director.

He said villagers saw the whale, which weighed about 400 kg, on the shore at 2 p.m. on Monday.

Domenden sent a team, which included veterinarian Samantha Licudine, to the village to revive the whale.

“It was impossible to send it back to the sea so they just stayed with it until it died,” Domenden said. Robert Gonzaga, Inquirer Central Luzon, and Yolanda Sotelo, Inquirer Northern Luzon