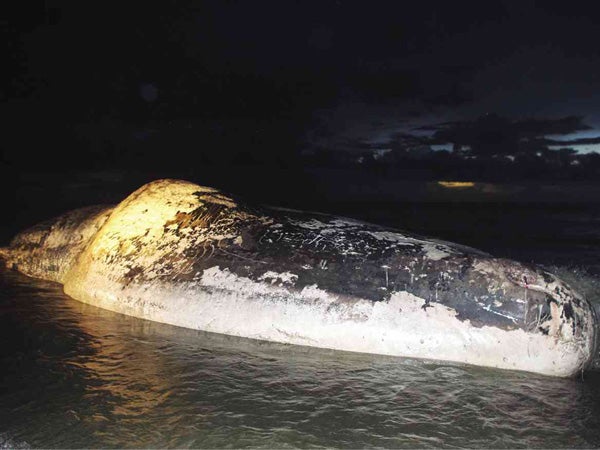 THIS 20-meter-long sperm whale, found dead on the shores of Laoag City on July 21, is the latest marine mammal that beached on Ilocos Norte’s coastline.
LEILANIE ADRIANO/INQUIRER NORTHERN LUZON

LAOAG CITY—The coastline of Ilocos Norte has become a burial ground of marine mammals, with another dead whale found on the shores of Barangay (village) Navotas here on Sunday.

The 20-meter-long sperm whale found at 4:30 p.m. on Sunday by a group of off-road vehicle enthusiasts was the third marine mammal found dead on the shores of the province this month.

On July 2, a dead spinner dolphin was washed ashore in Bacarra town while a dwarf sperm whale was found dead along the coastline of Pasuquin town on July 18.

The Philippine Marine Mammal Stranding Network (PMMSN) chapter in Ilocos Norte has responded to six cases of marine mammal stranding in the province since January.

Of the six marine mammals, only one, a rough-toothed dolphin, survived and was returned to the wild after it was rescued by fishermen and local officials in Badoc town in June.

Ramon Formantes, Laoag information officer, said he and other off-road riders were driving around the Laoag sand dunes on Sunday when they noticed what seemed to be a wreck at the shoreline of Navotas.

When they got closer, they saw the decomposing whale.

Valente said the whale’s body was vandalized, with figures of hearts, fish, letters and other characters carved on it.

He said they would use a backhoe and a payloader to bury the whale near the shore.

The PMMSN has identified Ilocos Norte as one of the hot spots of marine animal stranding in the country.

Valente said their records from 2010 showed at least 18 cases in the towns of Pasuquin, Burgos, Badoc, Currimao, Pagudpud and Bacarra and Laoag City. Of these, only seven animals were rescued and released.

Valente said marine animals get stranded when they flee fishermen hunting them or get sick as a result of polluted environments.

They also get stranded when they try to flee bad weather, dynamite fishing or get lost in their search for food.

Valente said cases of stranding in the past went unreported because locals were unaware about the endangered species.

“It took time for us to generate awareness and educate our fishermen,”  Valente said.

“There are some who still think that these are fish and can be eaten,” he said. Leilanie Adriano, Inquirer Northern Luzon