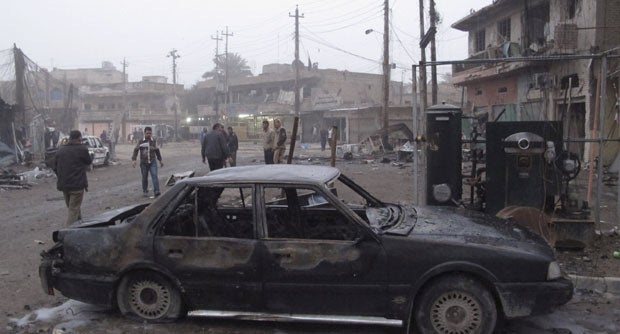 BAGHDAD — A suicide bomber struck inside a Baghdad cafe overnight where customers were watching a football game on TV, killing at least 12 people and wounding 38, Iraqi officials said Thursday.

The attack in the western Washash neighborhood took place late on Wednesday night, two police officers said. The bomber had mingled with the cafe crowd and set off his explosives-laden belt as they watched the game.

A medical official confirmed the casualty figures. All officials spoke on condition of anonymity because they are not authorized to talk to the media.

Iraq has been struck by a surge in violence unseen since 2007, relentless attacks that have become the Shiite-led government’s most serious challenge.

Violence has spiked since last April, when security forces cracked down on a Sunni protest camp north of Baghdad in clashes that left 45 dead.

Scores of people have been killed in the Iraqi capital, in recent attacks that have targeted busy areas, restaurants and other public places. On Tuesday, a series of bombings struck both commercial streets and security forces in Baghdad and its surroundings, killing 15 people.

No one has claimed responsibility for the latest attacks, but they bear the hallmarks of an al-Qaida breakaway group that frequently uses car bombs and suicide attacks to target public areas such as cafes, restaurants, mosques and markets to undermine the government’s efforts to maintain security in the country.

According to the U.N., 8,868 people were killed in Iraq last year — the country’s highest death toll since a peak of sectarian bloodletting in 2007.