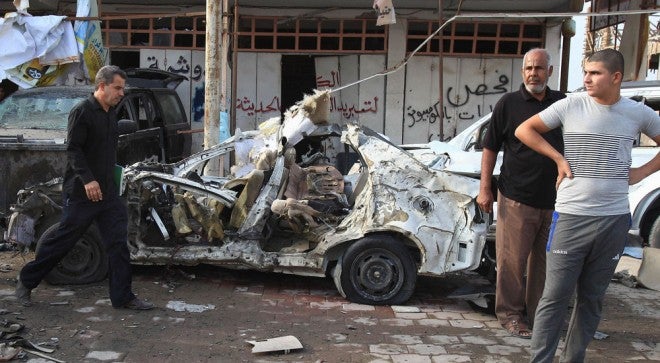 Civilians inspect the site of a car bomb attack in Basra, 340 miles (550 kilometers) southeast of Baghdad, Iraq, on Nov. 10, 2013. A series of bombings struck near markets, cafes and the theater in Baghdad on Sunday evening Nov. 17, the deadliest in nationwide attacks in which 22 people and 12 militants were killed. AP

BAGHDAD—A series of bombings struck near markets, cafes and the theater in Baghdad on Sunday evening, the deadliest in nationwide attacks in which 22 people and 12 militants were killed.

The bloodshed, which left more than 70 wounded across the country, was the latest in a protracted surge in violence that has forced Iraq to appeal for international help in combatting militancy just months before its first general election in four years.

The deadliest attacks struck in Baghdad, where a wave of evening bombings targeted civilians in both Sunni and Shiite neighborhoods of the capital.

A car bomb went off near the National Theatre in the center of the capital, while blasts also struck a market in south Baghdad and a cafe in the north.

Overall, at least 17 people were killed and more than 50 wounded, according to security and medical officials.

The explosions are part of a months-long trend of attacks timed to go off in the evening as Iraqis mass at public meeting places, with restaurants, cafes, and football pitches all hit as violence has surged.

In previous months and years, attacks had typically been timed to coincide with morning rush hour.

No group immediately claimed responsibility for the bloodshed, but Sunni militants linked to Al-Qaeda often set off coordinated bombings across Baghdad, ostensibly in a bid to undermine public confidence in the Shiite-led government.

Earlier on Sunday, violence in Baghdad and north of the capital left five people dead, while security officials claimed to have killed a dozen militants attempting to carry out attacks.

Two civilians and three insurgents died in the northern town of Tuz Khurmatu when a car bomb that attackers were moving to their apparent target went off—apparently by mistake—with the militants inside.

Twelve other people were wounded, including two Kurdish security forces guarding the Kurdish-majority neighbourhood in the ethnically-mixed northern town.

From late 2006 onwards, Sunni tribal militias, known as the Sahwa, turned against their co-religionists in Al-Qaeda and sided with the US military, helping to turn the tide of Iraq’s insurgency.

But Sunni militants view them as traitors and frequently target them.

North of Baghdad, a soldier was killed and three wounded in a bomb attack, while clashes between police and militants in the disputed city of Kirkuk left a gunman dead. Another was arrested and a third fled.

Four militants were also gunned down by police in two separate incidents while trying to plant roadside bombs in Baghdad’s south.

The unrest is the latest in a protracted surge in bloodshed that has pushed violence to its highest level since 2008, when Iraq was recovering from the worst of its Sunni-Shiite sectarian war.

Prime Minister Nuri al-Maliki has called for Washington’s help in the form of greater intelligence sharing and the timely delivery of new weapons systems in an effort to curb the bloodshed.

In addition to failing to curb the bloodshed, authorities have also struggled to provide adequate basic services such as electricity and clean water, and corruption is widespread.

Political squabbling has paralysed the government, while parliament has passed almost no major legislation in years.—Salam Faraj