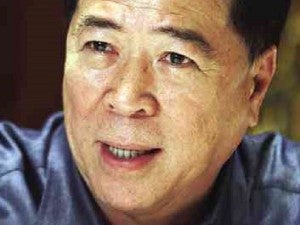 CEBU CITY, Philippines—Mayor Monico Puentevella of Bacolod City has described as “politically motivated” and “ridiculous” the filing of graft charges against him and two others for the allegedly overpriced purchase of computers using his pork barrel when he was a congressman.

In a statement, Puentevella said the story that came out in the Inquirer on Nov. 9 headlined “Raps readied at Sandiganbayan vs Puentevella” showed that the PR machinery of his rival, Bacolod Rep. Evelio Leonardia, was “on the loose once again like a rabid dog” out to destroy him by recycling an old story.

Leonardia has denied Puentevella’s assertion that he was behind the filing of the charges against him, saying he found it sad that Puentevella was trying to reduce the Ombudsman to a propaganda tool.

The story Puentevella was reacting to said the Ombudsman had found probable cause for the filing of graft charges against him and two others for the allegedly overpriced purchase of information technology packages for Bacolod City public schools in 2002, 2004 and 2005 using Puentevella’s Priority Development Assistance Fund (PDAF).

The IT packages cost P400,000 each and consisted of one computer, 50-80 compact discs, instructional materials and a one-day seminar on its use.

The Ombudsman, in a resolution dated Oct. 13, cited the Commission on Audit report that said the IT packages bought in 2002, 2004, 2005 and 2006 for 54 public elementary schools and 29 public secondary schools cost P26 million.

The COA said the purchase was “exorbitant,” according to the Ombudsman resolution.

It also said that Merryland received “unwarranted” benefits because the procurement was conducted without a public bidding in violation of Executive Order No. 40 and Republic Act No. 9182.

In a statement to the Inquirer, Puentevella said the complainant in the case was the late Allan Zamora, who filed the charges at the onset of the mayoralty campaign in March 2007 between Puentevella and Leonardia.

Leonardia, who was seeking reelection at the time, defeated Puentevella. Zamora was the city legal officer when Leonardia was Bacolod mayor but he has since died.

In the May 2013 elections, Leonardia was elected representative of the city while Puentevella won as mayor.

He said the purchase of the IT packages was endorsed by Education Secretaries Andrew Gonzales and Jesli Lapus.

In the meantime, Puentevella questioned why the plunder case against Leonardia had not been filed in the Sandiganbayan when the Ombudsman recommended the filing of the case on Oct. 16, 2012.

Puentebella said the case involved the alleged exorbitant purchase of furniture and fixtures for the New Government Center worth almost P50 million which was built during Leonardia’s term as mayor.

In a separate statement, Leonardia denied the case had been endorsed for filing in the Sandiganbayan.

He said the Public Assistance and Corruption Prevention Office of the Ombudsman had required him to file a counter-affidavit.

“Contrary to Puentevella’s allegations, this is not a case of overpricing but one of the interpretation of the law on bidding,” he said.