Jinggoy Estrada back from US, says he’s flying to storm-ravaged Ormoc | Inquirer News

Jinggoy Estrada back from US, says he’s flying to storm-ravaged Ormoc 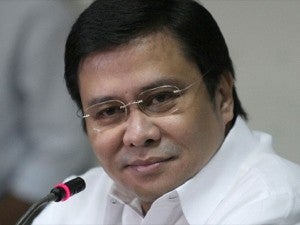 MANILA, Philippines—Sen. Jinggoy Estrada has returned from the United States and plans to visit Ormoc City, one of the areas ravaged by Supertyphoon “Yolanda.”

“Senator Jinggoy just called me to say he’s back and will proceed to Ormoc,” Justice Secretary Leila de Lima said in a text message to the Inquirer on Sunday.

There had been speculation that Estrada, who left on Nov. 2, might not return following the filing of a plunder case against him by the government in connection with the alleged misuse of pork barrel funds amounting to billions.

The Department of Justice last month asked the Department of Foreign Affairs to cancel the passports of Estrada, Sen. Juan Ponce Enrile, Sen. Ramon Revilla Jr. and others implicated in the alleged scam.

De Lima did not say if Estrada was accompanied on his return by his wife, Precy, whose medical checkup in the US for a lump on her breast was the reason for the trip according to the senator. Two of the couple’s children also left with Precy to follow the senator on Nov. 7.

Estrada promised when he left that he would be back before the Senate resumed its session on Nov. 18. The Senate blue ribbon committee is investigating the pork barrel scam.

The DFA has yet to act on the justice department’s request to cancel the passports of e those implicated in the pork barrel.

Thirty-eight people have been linked to the multibillion-peso scheme involving the funneling of public funds to bogus nongovernment organizations allegedly headed by Janet Lim-Napoles, who is detained in a military camp in Laguna.

TAGS: back from US, Jinggoy Estrada, plunder charge, Politics