PNP: Capa not yet qualified for promotion 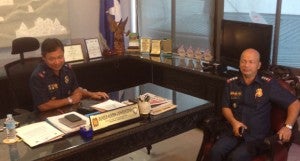 MANILA, Philippines—The Philippine National Police (PNP) said on Thursday that Senior Superintendent Conrad Capa was reassigned to the regional police because he is not qualified yet to earn his first star as a general.

The PNP maintained this amid the dispute over the relief of Capa, head of the task force that arrested businessman Delfin Lee, may have been disguised by his reassignment to the regional police.

“Here is our assessment, he is not qualified yet for the Chief Superintendent position,” PNP Deputy Director General Felipe Rojas told reporters in Camp Crame.

Inevitably, Capa has to serve as a Deputy Director for Administration, Deputy Regional Director for Operations (DRDO) or Chief Senior Division before he gets ripe for promotion.

Capa’s new designation is as the DRDO of Central Visayas Police Regional Office‎.

In previous interviews, Capa maintained that he deserved a promotion for capturing one of the most wanted people in the Philippines.

He was disappointed and “mad” after Director General Alan Purisima, PNP Chief, claimed that his reassignment was a step closer to his promotion‎.

But Rojas stressed that each policeman aspiring for promotion must go through the process to avoid speculations that his ascent is because of favoritism or “bata-bata system.”

“You cannot be promoted to a higher rank just because of an accomplishment. We have to strike a balance between seniority and competency,” he said.

The arrest of Lee by Task Force Tugis, headed by Capa, was met by criticisms regarding its legality, but also resulted in the delisting of Lee from the most wanted persons in the country.

Capa: Ready to tell all in Lee case