• If passed, pact would allow service sectors–from insurance to hairdressers–to set up up in each other’s territories 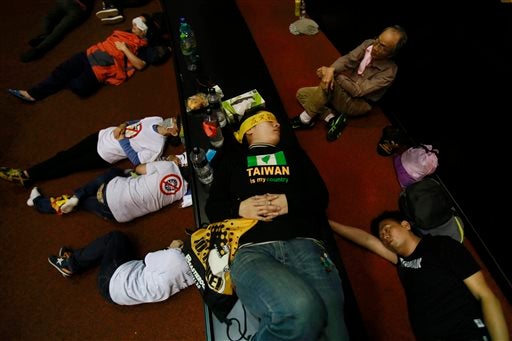 Student protesters sleep on the floor of the legislature after a night of scuffling with police in Taipei, Taiwan, Wednesday, March 19, 2014. Several hundred opponents of a far-reaching trade pact with China occupied Taiwan’s legislature late Tuesday, further delaying action on a measure that Beijing strongly favors. AP

TAIPEI, Taiwan  — Hundreds of opponents of a trade pact with China demonstrated in and around Taiwan’s legislature Wednesday, in the most serious challenge to date to President Ma Ying-jeou’s policy of moving the democratic island of 23 million people economically closer to Communist China.

About 200 protesters burst into the legislative chamber around 9 p.m. on Tuesday to protest the ruling Nationalist Party’s decision to renege on a promised clause-by-clause review of the trade deal, which was signed by both sides last year but is awaiting ratification by Taiwan’s parliament.

After midnight, police tried but failed to clear the chamber as demonstrators used dozens of chairs to erect barricades around the entrances. Several police were reportedly injured during brief clashes with the occupiers.

If passed, the trade agreement would allow Taiwanese and Chinese service sector companies — in businesses ranging from insurance to hairdressing — to set up branches or shops in the other’s territory. China would allow Taiwanese companies to conduct online shopping and offer medical care, transportation, tourism and other services on the mainland, while Taiwan would allow mainland companies to run businesses like publishing, theaters, morgues and medical care on the island.

Opponents say the deal would cost Taiwan tens of thousands of jobs because small businesses on the island will be unable to compete with cash-rich, mostly state-run Chinese companies intent on investing in Taiwan. They also say it would give a big boost to China’s efforts to bring the island, which split from the mainland 65 years ago, under its control.

During his six years in office, Ma has pushed for greater integration of the two economies. In recent years, there has been a dramatic increase in passenger flights across the 150-kilometer (100-mile) -wide TaiwanStrait and in 2010 the two countries implemented a partial free trade agreement that significantly slashed tariffs on a broad array of goods.

The Nationalists control 65 seats in the 113-seat legislature so the bill’s final passage seems a foregone conclusion. But ratification of the trade deal has been held up by delaying tactics by the opposition Democratic Progressive Party and Ma’s continuing spat with the legislative speaker, a member of his own party.

A move earlier this week by a Nationalist lawmaker to move action on the pact from a legislative committee to a binding vote on the legislative floor — without the promised review — appears to have galvanized its foes.

After Tuesday night’s takeover of the legislative chamber in downtown Taipei, about 700 more protesters gathered outside the building, which was blocked off by dozens of police officers carrying riot shields.

Briefly joining the protesters inside the legislature early Wednesday were senior leaders of the Democratic Progressive Party, which in recent years has gone a considerable way in muting its traditional stance in favor of formal Taiwanese independence, amid efforts to increase support among middle-of-the-road Taiwanese voters.

Chen Wei-rong, a 30-year-old graduate student at National Cheng Kung University in the southern city of Tainan, drove to Taipei early Wednesday after reading about the legislative takeover on Facebook.

“I came here because this is a very important bill, and the government is not listening to the voice of the people,” he said.