Aquino: Honor must be asserted in and out of PMA | Inquirer News
Close
menu
search

Aquino: Honor must be asserted in and out of PMA 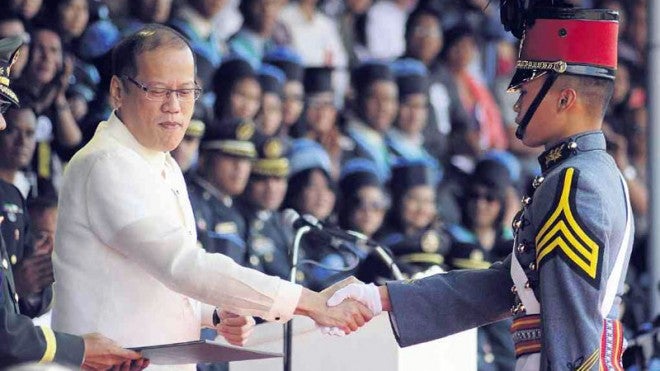 FORT DEL PILAR, Baguio City—Honor is the foundation of good leadership, but it must be asserted inside the Philippine Military Academy (PMA) and outside the school when cadets become military leaders.

That was the common advice offered to 222 graduates on Sunday by President Aquino, by the valedictorian of the newly graduated class of the PMA and by the academy’s superintendent.

The graduation week of PMA Siklab Diwa Class of 2014 was marred by the public campaign waged by Cadet Aldrin Jeff Cudia and his family to overturn his separation from the PMA for breaking the Honor Code.

Cudia was not mentioned in any of the speeches during the graduation rites. The dismissed cadet, who met with the President on Saturday at the Presidential Mansion here, was secured in an officer’s quarters at the request of the Presidential Security Group.

But the government’s appreciation of the PMA’s honor system rang clear during the graduation rites.

“Honor is one of the foundations of this institution—the honor of being a soldier, of wearing your uniform and saluting the Philippine flag; the honor of being part of an Armed Forces that has reclaimed the pride and trust of our public,” Aquino said in his commencement speech delivered in Filipino.

“That is why this is the challenge to all of us: If our task is to enforce the Honor Code inside this institution, let us uphold the code outside the PMA,” he said.

“If the code prohibits lying in class or to a fellow cadet, isn’t it also proper not to allow anyone, whether a fellow soldier or an ordinary citizen, to deceive others and the judicial system? If we are strict about expelling cheaters in an examination, we should also avoid taking advantage of the procurement of weapons and equipment,” he added.

“If there is punishment for stealing items from a school, let us all help prosecute people who steal people’s money.”

Maj. Gen. Oscar Lopez, PMA superintendent, told the members of Siklab Diwa Class (the acronym stands for “Sundalong Ikinararangal ng Lahing Bayani sa Diwang Wagas”) that “behind every blood, sweat and tear is the incomparable delight of receiving quality education, character building and the enviable opportunity to lead and serve the Armed Forces of the Philippines—all for free.”

Honor leads to happiness and is “a perfect virtue,” Lopez said.

“Happily ever after. This familiar line says … [that] no matter how horrible the villains are, the hero always wins. The good prevails, and so the story ends with everyone living happily ever after [because] honor is an essential requirement for happiness. All persons … whether ‘PMAer’ or not, must practice it if it is happiness he desires,” he said.

Lopez became PMA superintendent just when the issue over Cudia’s dismissal exploded on social media. He initiated a review of the cadet’s punishment and the honor system.

In his speech, Lopez said the honor system worked for the Honor Code, which required all cadets not to lie, steal, cheat or condone others who make these offenses.

“It is life that must be transformed by the honor system,” he said. “What makes the hero always win despite the odds is the fact that he has been living a perfectly honorable life.”

Honor was also on the mind of newly commissioned 2nd Lt. Jheorge Llona, the class valedictorian.

In his valedictory address, Llona said the honor system shaped his view.

“I announce proudly that the PMA shaped your children to become leaders of the AFP. The PMA taught us that in our dynamic security situation involving internal security operations, an internal peace and security plan, and a territorial defense plan, we continue to respect human rights and heed the international humanitarian law and the rule of law,” he said.

Aquino said Siklab Diwa’s challenges were only beginning after four years of training.

“Like the cadets before you, you will confront issues that will challenge your principles, and there are people who will seduce you [with] wealth and power,” he said.

“But as your Commander in Chief, I trust that the efficiency by which you employ the tactical theories you learned here will be as quick when righting wrongs,” he added.

Gloria Llona, mother of the valedictorian, said she had reservations about her son’s career.

“We fear for his life because he is now joining the military. But what can we do? This is what he wants, so we will support him. We will leave his fate to God,” said Llona’s father, Nelson.—With a report from Kimberlie Quitasol, Inquirer Northern Luzon