This time, PMA goat is a female 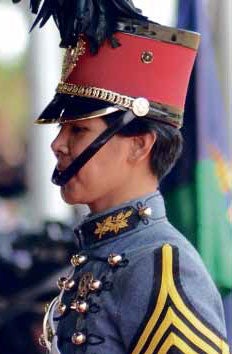 FORT DEL PILAR, Baguio City—One dish that guests of newly commissioned Air Force 2nd Lt. Ernalyn Fernando can be sure of won’t be served when they attend her homecoming in Tabuk City in Kalinga province is goat meat.

“We will slaughter a carabao, not a goat,” one of Fernando’s aunts said.

Fernando made history on Sunday when she graduated from the Philippine Military Academy (PMA) with the distinction of finishing last among the academy’s 222 graduates, earning her the title of class “goat.”

She was the first PMA female graduate to earn such a distinction 21 years after the PMA accepted women as students.

The PMA has traditionally called the last placer among its graduates as “goat.”

Fernando was the last to be called among the graduating cadets and yet, as tradition dictates, she also drew the loudest cheer from her classmates and the crowd gathered at the Fajardo grandstand here.

Past goats used to prepare a scene stealer—like giving a bouquet to the President, doing a handstand, bowing to the crowd or delivering a speech—but Fernando admitted she was still in shock over her being the goat.

Fernando said a single demerit brought her from 28th to 222nd.  She declined to reveal the nature of that demerit.

When the PMA announced the top-performing graduates last week, it said the class had 223 members. But on Sunday, only 222 cadets graduated.

“I’m still happy. At least, we graduated together,” Fernando said.

Fernando’s late father was a policeman from Quirino province while her mother is a Kalinga from the village of Bulanao in Tabuk City. She graduated from St. William’s High School in Tabuk before coming to Baguio to take up civil engineering in Saint Louis University (SLU).

She took the PMA entrance examinations when she was in her second year in SLU.

Fernando was one of the 19 women graduates of this year’s “Siklab Diwa” class.

Her distinction as “goat” was actually the second “first” for the women of her batch.

Newly commissioned Army 2nd Lt. Kerlyn Asuncion did her last strut at Borromeo Field, shouting her last orders as the first female adjutant or “bow wow.” In cadet lingo, the adjutant is referred to as the “bow wow” because the officer barks out orders relayed by the commander.

Breaking the glass ceiling were the “Magnificent Seven,” the first female graduates in 1997.

The first batch of women cadets entered the PMA in 1993, when Republic Act No. 7192 (Women in Development and Nation Building Act) gave women equal access to all service academies in the country.

The first female cadet to receive the athletic saber was Capt. Jessie Rose Bucalen, a member of PMA Class 2002. Like Fernando, Bucalen hails from Kalinga.

Richest of them all

According to Fernando, the goat gets to be the “richest” during graduation because it is a PMA tradition that his or her mistah (classmates) pass the hat and give all the money to the goat.

They also contribute to the first mistah that gets married after graduation.

Newly commissioned Army 2nd Lt. Precious Jewel Forrosuelo also made history as the first child of a Medal of Valor awardee to graduate from the PMA. The Medal of Valor is the highest award given to members of the Armed Forces of the Philippines.

Forrosuelo, daughter of the late T/Sgt. Claudio Forrosuelo, vowed to pursue the legacy of her father, who died fighting Moro rebels at Camp Abubakar in Maguindanao in 2000.

“Continuing the legacy of my father’s heroism would not be easy. Nevertheless, I would not let it be wasted,” Forrosuelo said in a statement.

One of the benefits given to families of Medal of Valor awardees is a guaranteed slot at the PMA, which allowed Forrosuelo to enter the academy in 2010.

Forrosuelo said the real challenge started when she entered the academy because the first child of a Medal of Valor awardee who joined PMA failed to complete the course.

“The pressure is even greater because they think of me as someone who is as strong and brave as my father, never caring about the fact that I am a female cadet,” she said.

In PMA, honor is not a hard concept to grasp