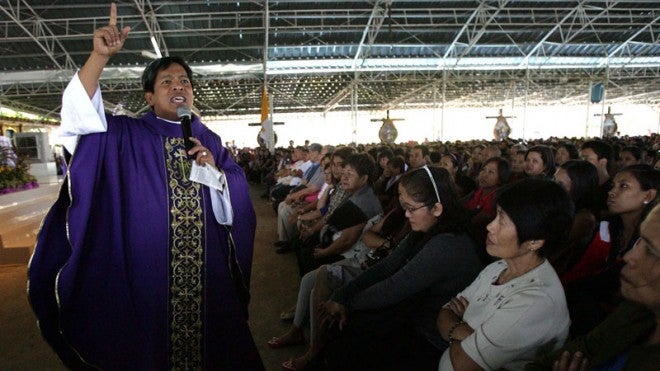 HEALING MASS. Fr. Fernando Suarez officiates a regular healing Mass at the MonteMaria pilgrim site in Barangay Amuyong in Alfonso, Cavite province. He announced that the Mary Mother of the Poor Foundation had terminated its project to put up a shrine with a mammoth Marian statue on a lot donated by San Miguel Corp. LYN RILLON

ALFONSO, Cavite—The decision to terminate an ambitious project with a colossal Marian statue, envisioned by healing priest Fernando Suarez to be taller than the Statue of Liberty in New York Harbor, was made long before San Miguel Corp. (SMC) expressed its concerns about the project’s financial management.

Since August 2013, the board of directors of Suarez’s Mary Mother of the Poor (MMP) Foundation had been writing to SMC, requesting a “renegotiation” of the original master plan for the MonteMaria project, an official said.

On Sunday, Suarez announced during his regular healing Mass at Barangay (village) Amuyong here that the MMP board had decided to return the 33-hectare lot SMC donated to the foundation out of the firm’s 125-ha grassland property and that the Mass on Easter would be the last to be held in the area.

Attended by thousands of devotees, the Mass was the first to be celebrated by Suarez at the project site since his return from a pilgrimage to the Holy Land, during which a special report on the aborted Marian project coincidentally ran in the Inquirer.

Suarez slammed what he called attempts to sow intrigue and destroy his reputation in the media as a result of the earlier decision to abandon the project.

“In all honesty, the foundation could not set up the project according to the master plan,” he said. “We never had interest in the land.”

He said SMC was not demanding the return of the land. “We were wholeheartedly returning the land because the foundation could not carry out the terms of the donation,” he said. “That’s the truth. It is as simple as that.”

In an interview, Deedee Siytangco, a spokesperson for Suarez and a member of the MMP board, said the board initially wanted to “simplify” the MonteMaria plan and do away with the conditions agreed upon by MMP and SMC—the completion of 50 percent of the project in five years from January 2011, and the rest in another five years.

She said the board was prepared to spend P1 billion for site development, but that the soft volcanic soil in the SMC property prompted the group to back out of the deal.

The MonteMaria plan, she said, was designed for a mountaintop, referring to the 5 ha originally offered to MMP by Abacore Capital Holdings Inc. of former Batangas Gov. Hermilando Mandanas.

“Personally, I feel betrayed,” Siytangco said, referring to two SMC lawyers who sat on the MMP board and were all aware of the foundation’s proposal.

She said SMC and MMP had agreed to issue a joint statement on the project termination. Since the issue was publicized, she said, “I have not heard anything from them.”

Suarez, in his homily, referred to criticisms made by Inquirer columnist Ramon Tulfo and retired Archbishop Oscar Cruz.

He said he hoped that Cruz was misquoted in his published remarks. “I will pray that you are right because if you are wrong, you will be condemned in heaven,” he said.

Despite the controversy, Elmer Gomez, 68, from Cavite City, said he would still attend Suarez’s Masses, as thanksgiving after he was healed of prostate problems in 2008. “It’s in the faith in God, not in the person,” he said.

Robert Alberto, 54, said he spent P1,500 to drive all the way from Manila to take his 11-year-old son, who suffered from epilepsy, to Suarez. He said it was faith that drove him to MonteMaria, “like Jesus touching his child in the head.”

Siytangco said around 10,000 people came on Sunday, based on the number of hosts given during communion.

She said MMP had spent P100 million to develop the roofed chapel, a multipurpose area for the devotees, the Station of the Cross, the parking space, and the rest of the facilities at MonteMaria. The foundation, she said, also spent P300,000 monthly for “maintenance” and security.

“You only see the donations coming in. You don’t see what’s coming out,” she told the Inquirer.

Suarez said he held no grudge against SMC.

“We thank San Miguel for allowing us to use this property. In the past four years, we healed many. More than 1 million were enlightened,” he said. “I prefer others to hate me for what I am than love me for what I am not.”

Father Fernando Suarez:  I forgive and pray for my detractors