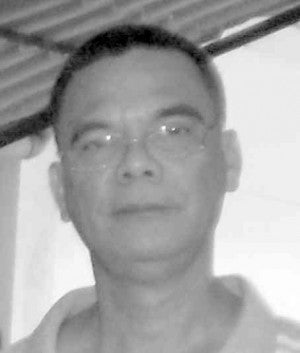 ILOILO CITY, Philippines—Romeo Capalla was returning to his sport utility van after fetching his mother-in-law at the public market of Oton town, 7 kilometers from here, on Saturday night when two men approached him from behind.

Suddenly, the men drew their handguns, pointed these near Capalla’s nape and fired.

The victim, a younger brother of Davao Archbishop Emeritus Fernando Capalla, was a former political detainee during the Marcos dictatorship and had joined the underground movement before his imprisonment.

He was also former manager and chairman of the board of the nongovernment Panay Fair Trade Center (PFTC), which helps farmers and women organizations produce and sell natural and organic products for local and international markets.

About an hour after Capalla was gunned down at 6:30 p.m., unidentified men burned a truck, bagasse and a portion of a building of a muscovado sugar mill operated by a farmers’ organization being serviced by the PFTC in Barangay (village) Dabong,

“We were listening to radio reports on the shooting of (Capalla) when residents raised alarms after they saw the fire,” said Margarita Estrada-Panganiban, manager of the mill owned by the Katilingban sang mga Mangunguma sa Dabong (Kamada).

Police were still determining if the Capalla’s killing and the fire were related. The fire destroyed or damaged about P200,000 worth of property, according to the Bureau of Fire Protection in Janiuay.

Insp. Feliz Alianza, Janiuay police chief, said at least four people doused the equipment and building with gasoline before setting these on fire.

Insp. Jigger Gimeno, Oton police chief, said Capalla’s assailants fled on two motorcycles with at least two other persons believed to be lookouts and headed toward the neighboring town of Tigbauan in southern Iloilo. 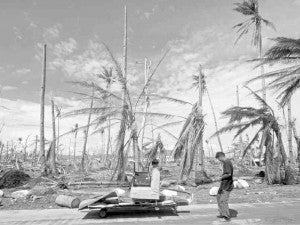 A MAN pulls a cart with foraged materials amid ruins in Palo, Leyte on Nov. 21, 2013. ALANAH TORRALBA

Investigators have yet to determine the identities of the assailants and their motive.

Two militant human rights groups—Karapatan and the Samahan ng mga Ex-Detainees Laban sa Detensyon at Aresto (Selda)—blamed hit squads of the military for the attacks, pointing out that Capalla had always been tagged as a ranking commander of the communist New People’s Army (NPA).

“First they harassed him by filing trumped-up charges. They were unsuccessful. So now they killed him,” said Reylan Vergara, Karapatan-Panay secretary general.

“We condemn his killing and we are not in any way involved. He and his family deserve justice and we will help the police in their investigation,” Tiongson told the Inquirer.

He was detained for 32 days on charges of allegedly taking part in an attack of NPA rebels on a field office of a construction firm in Guimbal town, also in Iloilo, in 2004.

The Regional Trial Court Branch 67 in Guimbal ordered Capalla’s release on Sept. 5, 2005, for lack of evidence.

In seeking the dismissal of the case against Capalla, his colleagues at the PFTC pointed out that he had been working with the center since 1994 and had been the firm’s manager since 2001.

Fortunato Pelaez, Selda vice chair for the Visayas, said Capalla surfaced after the

Edsa I revolution in 1986 and had been helping farmers’ organizations.