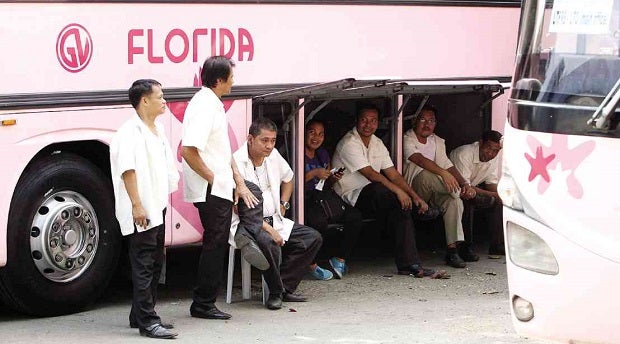 DRIVERS of GV Florida Transport Inc. wait at the Land Transportation Franchising and Regulatory Board for the thorough inspection of their bus units following a deadly accident in Bontoc town, Mt. Province, involving a GV Florida bus. MARIANNE BERMUDEZ

MANILA, Philippines—The Land Transportation Franchising and Regulatory Board (LTFRB) on Friday ordered the six-month suspension of bus operator GV Florida, which operated the unit that fell into a ravine in Bontoc town in Mt. Province last month, killing 15 people and injuring dozens of others.

The LTFRB said the suspension covered 28 certificates of public convenience (CPCs) with 188 authorized units. An LTFRB spokesperson, citing documents submitted by the Philippine National Police, said the accident was caused by faulty brakes.

The board also cancelled and revoked the CPCs of 10 buses of Mt. Province Cable Tours, the other bus company involved in the accident, which are also now owned by GV Florida.

LTFRB chair Winston Gines said that while the board recognized the business impact of the suspension to the bus company and welfare of its employees, it had to penalize GV Florida by stopping its operation for the next six months.

The order took effect on March 11, the day that the 30-day preventive suspension order issued by the board lapsed.

Gines said there is no concrete assurance that the suspension will be lifted after six months to allow the bus company to resume its operations.

The road accident on Feb. 7 had cost the province a bus franchise that ferried residents direct to Metro Manila, prompting the Department of Transportation and Communications (DOTC) to study an improved mass transport plan for the Cordillera region.

Mt. Province Gov. Leonard Mayaen said transport officials must also find a way to restore a franchise for a direct route that would service his constituents and visitors who travel to Metro Manila and back.

Tourist towns like Sagada benefited from the direct route.

“The people of Mt. Province who go to Manila and those coming to our province are already experiencing difficulties and they want the direct line to Manila to resume as soon as possible,” said Mayaen.

“We have also observed a decline in tourist arrivals, local and foreign, because there is no more bus [traveling direct] from Manila to Bontoc,” he said.

She said the DOTC has been studying road and highway maps supplied by the Department of Public Works and Highways to calculate how much more public transport franchises need to be opened to serve the Cordillera market.

More jeepneys and buses would also discourage “top load” commuting, a reference to passengers who ride on the rooftops of vehicles, which public utility drivers accommodate because of the shortage of public vehicles serving remote areas in the region.

But the Cordillera is hampered by a franchise moratorium covering the country, Claver said.

“We will only be able to issue another franchise for the Bontoc-Manila route as replacement if the GV Florida franchise is canceled,” Claver said.

Senior Supt. Oliver Enmodias, Mt. Province police director, said students who come home to Mt. Province and return to Metro Manila regularly are the ones most affected by the franchise’s cancellation.

Most travelers go to Baguio City to catch scheduled trips to Mt. Province and Kalinga while some choose to hop on buses that would take them to Ifugao and Mt. Province via the Cagayan Valley region.

The GV Florida unit involved in the accident, with license plate TXT 827, was originally issued to a minibus with engine number LX-004564 and chassis number KN2EAM912PK004452 under the name of Norberto Cue Sr. of Bontoc, Mt. Province.

The CPC was granted under LTFRB Case No. 2007-0407, with the authorized route Sagada-Bontoc-Manila via Banaue, Ifugao.

The actual stencil taken by LTO-Bontoc personnel on the fallen bus indicated that the motor/engine numbers DE12T-601104BD and chassis number KTP1011611C were entirely different from the engine and chassis of the bus unit with license plate TXT 827.

As a condition for the lifting of the suspension order, the bus company must require all their authorized drivers to secure the National Competency III from Technical Education and Skills Development Authority. With a report from Vincent Cabreza, Inquirer Northern Luzon

Father hugged me. I was saved – Florida bus crash survivor