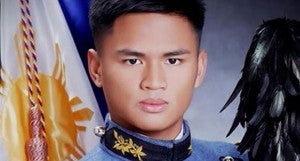 BAGUIO CITY, Philippines—The Commission on Human Rights (CHR) on Friday asked the Philippine Military Academy (PMA) to reinstate Cadet First Class Aldrin Jeff Cudia to the PMA Corps of Cadets, saying he had not been accorded due process when he was dismissed from the PMA in February.

CHR Commissioners Ma. Victoria Cardona and Norberto de la Cruz also asked the PMA to allow Cudia to join the commencement exercises of the PMA Siklab Diwa Class of 2014 on Sunday, and to restore the dismissed cadet’s salary and benefits.

Cudia, who was running for third honors, was dismissed from the PMA on Feb. 10, for allegedly lying to justify his being late to a class. Lying is considered a major violation of the PMA’s Honor Code.

Harold Kub-aron, CHR Cordillera director, said the agency has yet to decide whether it would pursue a lawsuit against the PMA.

He said the CHR had been asked to address the complaint of Cudia’s father, Renato, who claimed that the hearing had been manipulated to secure a unanimous guilty verdict, a requirement before a cadet breaking the honor code can be dismissed from the academy.

The Cudia family presented on March 12 an affidavit by Commander Junjie Tabuada, head of the PMA Department of Naval Warfare, who claimed that a certain Cadet First Class Lagura, a member of the honor committee, had told him he had been pressured to change his original “not guilty” ruling.

But Col. Rozzano Briguez, the commandant of cadets, said that Lagura had executed his own affidavit and “had categorically” denied making the statement.

Last week, the PMA’s Cadet Review and Appeals Board (Crab) examined the process taken to expel Cudia and upheld the honor committee ruling, which the new PMA superintendent, Maj. Gen. Oscar Lopez, had endorsed to the Armed Forces of the Philippines leadership on March 10.

Kub-aron said initial evidence had confirmed that the original vote cast by the honor court involved eight “guilty” votes and one “not guilty” vote, which the PMA should heed, instead of the second vote that unanimously ruled Cudia guilty of lying.

The CHR and the Crab held separate hearings on Cudia’s appeal this week, with Cardona and Dela Cruz holding closed-door sessions on Wednesday and Thursday to secure testimonies from the cadets, members of the PMA Corps of Professors and the academy’s staff.

Cudia was present in the sessions but without a lawyer, Kub-aron said.

For PMA cadet, Cudia remains to be ‘mistah’ amid scandal