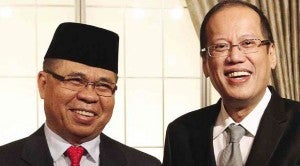 PRESIDENT Aquino poses for a photo with Al Haj Murad Ebrahim, chair of the Moro Islamic Liberation Front, after their meeting in Tokyo in August. MALACANANG FILE PHOTO

On Oct. 15, 2012, the framework agreement was signed in Malacañang.  The framework document, the annexes and an introductory text constitute the comprehensive agreement.  The two sides still needed to work on the four annexes: Transitional mechanisms, power-sharing, wealth-sharing and normalization.

On Dec. 17, 2012, the President signed and issued Executive Order No. 120 creating the Transition Commission (Transcom) that would draft a proposed law creating the envisioned Bangsamoro autonomous government. Once drafted, the Bangsamoro basic law would be certified urgent by the President and submitted to Congress.

On Feb. 27, the two panels signed the first annex—transitional arrangements and modalities—that outlined a transition process consisting of eight components beginning with the creation of the Transcom and ending with an exit document terminating the peace negotiations, “if and only when all agreements have been fully implemented.”

On July 13, the second annex which tackles wealth-sharing was signed by both parties. Under the annex, 100 percent of the revenue from the exploration, development and use of nonmetallic minerals would go to Bangsamoro. For metallic minerals, 75 percent of the revenue would go to Bangsamoro and 25 percent to the government. Earnings from fossil fuels, such as oil, natural gas, coal and uranium would be divided equally.

Further, Bangsamoro would get 75 percent of national taxes collected from the territory, up from the current 70 percent in the ARMM.

On Feb. 8, the office of the Bangsamoro Transition Commission (BTC) was inaugurated in Cotabato City. The BTC has been commissioned to draft the Bangsamoro Basic Law, which will become the foundation of a future Bangsamoro entity.