The government panel also signed the addendum on the Bangsamoro Waters on Saturday in Kuala Lumpur in Malaysia, which has been brokering the negotiations..

Earlier in the day, Presidential spokesperson Edwin Lacierda tweeted: “Ladies and gentlemen, we have an agreement.”

The government said it was expecting good news on Saturday’s plenary meeting in Kuala Lumpur on the normalization annex that would discuss the laying down of arms by both parties.

Both parties have also signed the annexes on transitional arrangements and modalities, revenue generation and wealth sharing, and power sharing. 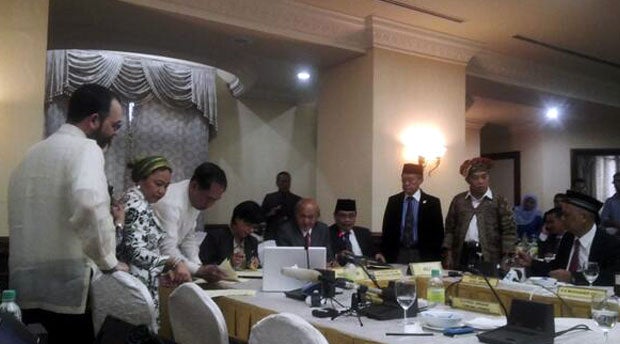 Once the documents are completed, a separate political entity called the Bangsamoro Political Entity will replace the Autonomous Region in Muslim Mindanao (ARMM).

The Comprehensive Agreement on the Bangsamoro (CAB), comprising four annexes, will be signed in Manila.

While other armed groups remain, turning the Moro rebel group into a government ally is seen as a key step to end the Muslim insurgency.

Moro National Liberation Front rebels took scores of hostages in September when they seized coastal communities in southern Zamboanga City after accusing the government of reneging on its commitments under a 1996 autonomy deal. Thousands of troops ended the 10-day uprising with a major offensive that killed more than 200 people, most of them insurgents.

Late Friday, four explosions damaged a gymnasium and the main gate of the town hall of Malabang municipality in southern Lanao del Sur province. Police said it was not immediately clear if groups opposed to the talks were involved.

Evan Jendruck from the IHS Jane’s Terrorism and Insurgency Centre said the success of the new peace agreement hinges on the ability of the former Moro insurgents to put other armed groups under control. While the military would still have a presence in the new autonomous region, security would basically be in the hands of a Bangsamoro force composed of former insurgents.

A preliminary peace accord that was about to be signed in Malaysia was turned down in 2008 by the Supreme Court, sparking rebel attacks on Christian communities that provoked a major military offensive and shattered a ceasefire.