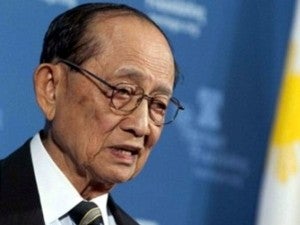 ROSALES, Pangasinan – For three days now, the ancestral home of former President Fidel V. Ramos and his sister, former Senator Leticia Ramos-Shahani, in Asingan town has not been getting electricity from the local power utility.

“Thirty minutes after I was interviewed [by a local radio station] on Wednesday, [our house] electricity went off,” Shahani told the Philippine Daily Inquirer by phone on Friday.

The board member lives in the Ramos home at Barangay (village) Poblacion West with his mother, the former senator.

“Clearly, this is harassment,” the young Shahani said.

On Monday last week, Shahani was the most vocal critic of Panelco III’s board of directors, who turned up at the week’s provincial board session in Lingayen town to explain the December power rate increase that had angered consumers.

The electric cooperative’s rate for residential consumers shot up from P9.80 per kilowatt hour (kWh) to P15.40 per kWh when its power generation cost increased to P5.6384 per kWh. The generation costs of all utilities are passed on to their customers.

But Panelco III manager Hugo Celso Sansano said the cooperative had nothing to do with the Ramos house’s power issues. “Their house lost power, but we did not cut if off,” Sansano said on Saturday.

“We don’t know what happened because he (Shahani) did not ask for our help to look at it,” he added.

The provincial board will again tackle the Panelco issue on Jan. 27.
RELATED STORIES